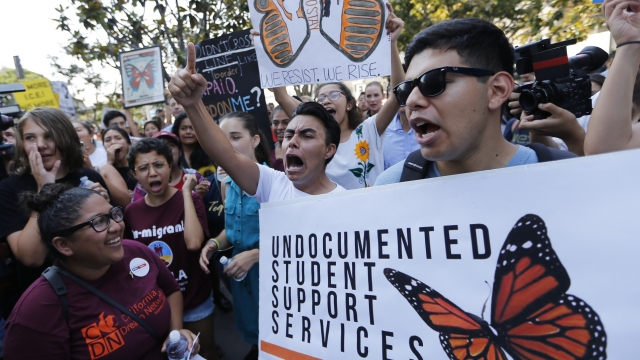 SMS
Youth Activism Isn't New, Despite Its Social Media Prevalence Now
By Newsy Staff
By Newsy Staff
March 22, 2022
Movements led by young people in the U.S. can date back to the mid 1900s, like the Greensboro Four and Tinker v. Des Moines.

When you think of youth activists today, who comes to mind? Maybe Greta Thunberg — a climate activist who gained widespread attention at 15 — or maybe Parkland shooting survivors X González and David Hogg.

These young activists are pretty well-known figures, and they've got the social media influence to match some of your favorite celebrities. But there are lots of young people doing this work without making headlines.

In recent years, there's been an increase in the visibility of student activists with the rise of social media. Engaging in political activity only on social media is often known as “slacktivism" — maybe you follow some people whose activism ends at retweeting.

Jesica Siham Fernández, a professor at Santa Clara University who studies youth activism and its relation to social media, sat down with Newsy to help explain how this is actually an opportunity to get young people more involved.

“I think it's important for us to pay attention to that as adults, as educators, as community members, to tap into the young people who are circulating these forms of performative activism on social media, to really center them in an understanding of what the issues are and then how they can actually follow up with actions so that it doesn't become hollow," Fernández said.

One study from Tufts University found young Americans are increasingly going offline and taking their activism to the streets.

A 2018 poll found that young people ages 18 to 24 were three times more likely to have attended a march or demonstration than they were in 2016.

The research also found that people who participated in offline activism were more likely to vote. In the 2020 presidential election, young people voted in record numbers. Half of people ages 18 to 29 voted, which was an 11% increase from 2016.

While youth activism might look a little different these days, it’s not new. Let's take a look back at some of the earlier movements that were led by young folks here in the U.S.

There were the student-led sit-ins in Greensboro, North Carolina in 1960. Young Black men who attended local HBCU North Carolina A&T State University sat at a whites-only lunch counter and refused to give up their seats. They became known as the Greensboro Four and inspired more sit-ins in college towns across the country.

In 1965, students in Iowa were suspended from school when they wore Black armbands to protest the Vietnam War. They sued the school, and the case went all the way to the Supreme Court. In a 7-2 decision, the Court sided with the students in Tinker v. Des Moines, saying students have a right to free speech in public schools.

In 1968, nearly 20,000 students from the mostly Chicano neighborhood of East L.A. staged a series of walkouts to protest inequality in public schools. UCLA's Chicano Studies Research Center calls this the first mass protest by Chicano and Chicana people in a major city. It resulted in more bilingual classes, more Mexican-American staff and improvements to libraries and classrooms.

A more recent example: Students helped pave the way for Deferred Action of Childhood Arrivals, also known as DACA. The United We Dream organization was founded by young American immigrants in 2008, which has helped bring about DACA and combat anti-immigrant policies. Young people of all backgrounds have taken part in sit-ins, walkouts and a march to the Supreme Court.

“It's certainly important for us as adults to create spaces that allow for young people to center their voices and their experiences and to leverage whatever resources or forms of power," Fernández said. "We have to amplify their stories and their experiences and to also give young people a lot more credit. They're much more savvy when it comes to using technology and communicating and conveying messages in crazy ways that are accessible, engaging and informative to a much broader and wider audience.”

Sara Mora was born in Costa Rica and came to the U.S. at three years old. She is a DACA recipient and activist for immigrant rights who was elected co-president of the Women’s March Youth Empower at 22.

“It’s not just DACA recipients, there’s TPS, there’s H4, there’s refugee status," Mora said. "The mess that the government created has to be fixed. I think there’s just such a misconception about migration.”

In the past few years, there have also been young people protesting gun violence, such as the student-led March for Our Lives in 2018.

Some students there were really young, like Naomi Walder. She planned a walkout at her elementary school to protest gun violence after the Parkland shooting.

“My friend and I might still be 11, and we might still be in elementary school, but we know life isn’t equal for everyone, and we know what is right and wrong," Walder said.

And Black Lives Matter has seen a lot of students lead the movement across the country. People like Thandiwe Abdullah have paved the way. She co-founded the Black Lives Matter Youth Vanguard and was named one of the most influential teens by TIME magazine.

“This, all of us, is the outcome of years and years of oppression, of violence, of racism," Abdullah said.