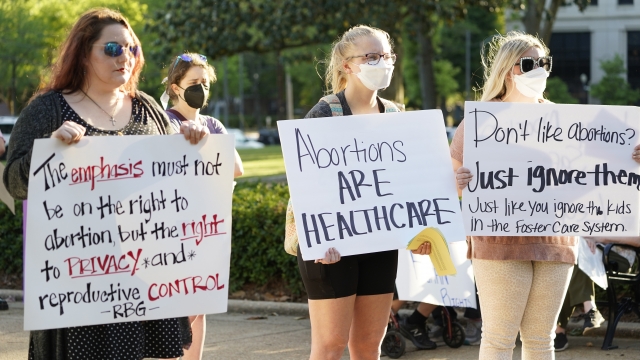 “I can’t physically, emotionally or mentally properly take care of this child,” said Amanda, who considers herself “pro-choice.”

When Amanda got pregnant at age 21, she was in an abusive relationship, in between jobs, and without health care. From there, she turned to planned parenthood to talk about options.

“I sat there and at one point, I broke down and I said, ‘What do I do?’ She was very kind and said, while I can’t tell you what to do, I can give you as much information so you can make that decision for yourself; I did and from there, I chose to have an abortion,” said Amanda.

For nearly half a century, federal protections for abortion rights have withstood legal challenges. Earlier this week, a leaked Supreme Court draft opinion shows the high court poised to strike down that longstanding precedent.

A woman who doesn’t want to be identified for fear of backlash, says she had two abortions. The first, 34 years ago, at age 15. The second, at age 18, after facing pressure from family, her boyfriend at the time, and clinic staff.

“It’s hard for me to even talk about now, the feelings come back of how awful and hopeless I felt,” the woman said. “I still live with the pain; I don’t think it’s anything that ever goes away. It’s traumatic to your body, your mind and to your heart.”

She now considers herself “pro-life” and says after years of counseling and therapy for coping with post-abortion symptoms like depression and anxiety, she has a message for those considering a similar path.

“I’d like them to know what they are facing and what the consequences of abortion may be for them, so they are making an informed choice,” the woman said. “While I believe there are some women who don’t have remorse, I believe they are few and far between.”

Researchers at the University of California in San Francisco followed 667 women across 30 clinics, after they received an elective abortion, the researchers found the majority had either positive feelings or no emotion at all toward their decision both a week later, and five years later.

Amanda says she didn’t experience the post-abortion stress or anxiety.

“It was more so seeing friends with their children, cause I would have loved to have my child and thinking ‘oh, my child would have been five.’ It sucks, it’s not a decision that I had to make lightly. It’s just something that I felt would be better for everyone involved,” Amanda said.