Why The Fight To Cancel Student Debt Keeps Stalling 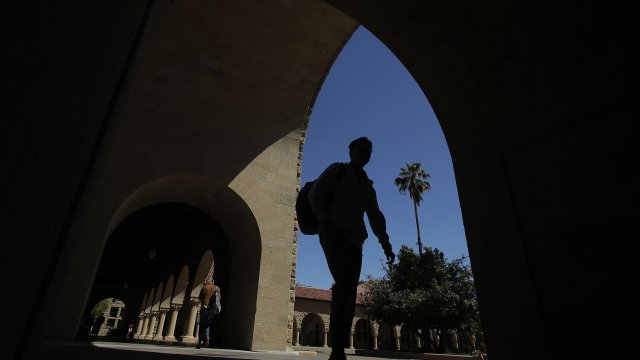 SMS
Why The Fight To Cancel Student Debt Keeps Stalling
January 12, 2022
Until May, it's unclear if the executive branch will step in to forgive some debt, and the debate over how much should be wiped will continue.

The pause on student loan payments that began in March 2020 has been extended to May 1 of this year.

With that extension, there's been a lot of discussion about what the president can or can't do about student loans.

It's clear student loan payments can be a massive burden on households, and loans might never get fully paid off — especially with steep interest rates that keep monthly costs rising.

One estimate found that only about 56% of federal loans are being repaid. For the rest, the borrower is likely deferring or in forbearance from struggling to pay, or has already defaulted on their loans.

As the trajectories of repayment are going down, the costs of the loans are only rising.

Total student loan debt has reached more than $1.7 trillion, and it's far larger than the estimated totals for credit card debt or auto loans.

So it's no wonder why recent polling showed 62% of Americans support at least some kind of student loan forgiveness. However, it's proven tricky in Congress to make that forgiveness happen, despite the clear crisis we've found ourselves in.

That's partly because — to begin with — there's still some confusion over who can actually do something about this. If you ask the president's administration, they'll point to Congress.

"If Congress sends him a bill, he's happy to sign it," White House Press Secretary Jen Psaki said. "They haven't sent him a bill on that yet."

And the Education Department roots this argument in the U.S. Constitution, which says only Congress can pass laws that use Treasury money.

But some members of Congress are saying not so fast.

Among Democrats, prominent voices ranging from Sen. Elizabeth Warren to Senate Majority Leader Chuck Schumer often point to the once-obscure provision of the Higher Education Act, dating back to the 1960s. It gives the secretary of Education — and thus, the executive branch — the authority to "enforce, pay, compromise, waive, or release" a federal loan.

It's worth mentioning that the Biden administration has already canceled some debt using more targeted measures, and for exceptional cases. The administration erased about $13 billion in loans for over half a million borrowers. That includes more than $7 billion for people with "total and permanent disability."

President Biden promised on the campaign trail to forgive $10,000 for each person with student debt.

"I'm going to make sure that everybody in this generation gets $10,000 knocked off of their student debt as we try to get out of this god-awful pandemic," President Biden said.

But some Democrats in Congress are calling for as much as $50,000 in loan forgiveness — a sum which, based on Sen. Warren's analysis of Department of Education data, would erase student loan debt for 36 million Americans.

And so, the legal and political debate over who can forgive what continues.

So, can Congress act here? Yes, but there are a few points of contention beyond just how much to forgive.

First, it's important to remember how big that loss would be — federal aid makes up most of the debt by far, covering 90% of all student loans, as opposed to private lenders.

Second, universities are a surprisingly strong lobbying power. This stopped the administrations under Presidents Obama and Trump from collecting data on debt and proposing possible reforms to federal lending programs.

And last, there is a persistent idea that canceling debt would actually help the people who need it least and widen the wealth gap. President Biden even alluded to this at a CNN Town hall last year, saying he is wary of erasing "billions of dollars in debt for people who have gone to Harvard and Yale and Penn."

This idea comes from data showing a higher concentration of borrowers are from households with higher earnings after graduation.

But this is not the group of people who struggle the most with student loan debt. That tends to be those from for-profit colleges, community colleges and above all, those who can't finish their degree.

Even though the amount borrowed is less than, say, someone with a graduate degree, borrowers with less than $10,000 of debt on average are most likely to go into default.

So, until May arrives, it's unclear if we'll see the executive branch step in to forgive some debt, and the debate over how much of America's student debt should be wiped clean will press on. What is clear is that the ballooning problem of inescapable student debts is rapidly becoming too big to ignore.