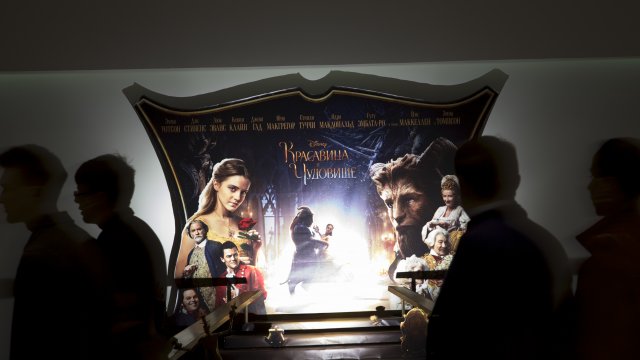 Disney faced a wave of backlash after donating hundreds of thousands of dollars to backers of the "Don't Say Gay" bill in Florida, a state where the company dominates in political power. Notably, much of that backlash came from within the company itself: employees held a walkout and organized open letters to CEO Bob Chapek, and many prominent staffers have been vocal on social media - fundraising for LGBTQ-supporting charities.

These developments signal a significant shift in how Disney gets involved in politics and social issues, and that’s a pretty big deal considering its long and complicated relationship with the LGBTQ community in particular.

To understand that relationship more, we’re gonna take a Disney deep dive, with the latest installment of Pop Quiz.

Do you know who the FIRST openly gay Disney character is?

It's a bit of a trick question, because it seems like Disney isn’t sure either. There have actually been eight characters that were announced as a “first openly gay character” to varying degrees, and each got a lot of press attention.

These “first gay characters” reflect something contradictory about Disney’s LGBTQ legacy. On the one hand, these characters are so groundbreaking, they stir up lots of headlines and controversy, yet they seem pretty minor considering it's hard to name a single one. So what’s the deeper story here?

Our Pop Quiz question today is: Why does Disney have so many “First Gay Characters”?

The complicated relationship between Disney and the LGBTQ community goes back — from Chinese censorship boards, to queer-coded lions, to the political showdown happening right now in the Florida state senate.

Let’s start with the characters themselves. The eight "first" openly gay characters range from minor characters to just figures in the background — some have just one or two lines.

Characters that explicitly identify their sexuality, or are seen with a same-sex partner, are typically blink-and-you'll miss it moments. Many online have theorized this is because it makes it easier to edit them out for overseas movie markets.

Russia changed a line from Disney's "Onward" from "my girlfriend" to “my partner," the brief "Star Wars" same-sex kiss was edited out of the film for Singapore. But this theory seems a little shaky, since the edits haven’t been consistent. The "Star Wars" kiss stayed in for China, and despite demands from the Malaysian government, Disney refused to edit out the same-sex dance moment at the end of "Beauty and the Beast." The country ended up allowing the film to play unedited.

So strict censorship boards abroad may definitely be a factor — particularly in China, which is expected to overtake the U.S. as the largest film market in the world — but that theory seems like an incomplete picture. In order to fully understand the “first gay characters," we need to hit rewind on movie history.

From the 1930s up until 1970, the Motion Picture Production Code, or the Hays Code, prohibited any explicit depictions of homosexuality. This led to a rise in “queer-coded” characters, where the subtext implies a character may be queer.

"You had to leave broad clues to try and indicate that because you couldn't," Griffin said. "You were not allowed to say it out loud. Various people started learning how to read the clues, but the problem is, once you train an audience to read clues, they may find clues that were not intended by the makers."

There’s quite a bit of agreement when it comes to how Disney’s villains are coded.

"One can read the villains being queer coded as being presented in a negative or a bad image or, you know, evil, and I don't want to try and argue that that's not true," Griffin said. "But there are a number of various openly gay or queer people, audiences that totally love the villanesses, love Maleficent, for example, in "Sleeping Beauty. Maleficent is 10 times more interesting than Sleeping Beauty is... there is an identification with sort of like, you know, the here's the straight couple over here, but.... yeah, let's watch the villains. They're actually more interesting!"

As Griffin explained, leadership at Disney has recognized that there is a dedicated fanbase within the LGBTQ community. For the past few decades the company has worked to appeal to these audiences without upsetting other big audiences, like conservative Christian groups, but they’ve recently been tip-toeing along that line thanks to their stream of “first gay characters."

When we talk about these first gay characters, it’s easy to poke fun at how subtle they are, but remember how much complicated history is behind moments like this. Now as audiences and employees are forcing a reckoning with the company’s political power, Disney may really take on this unique responsibility more as the studio with the strongest brand for children’s entertainment.

"Being able to be seen to feel like you're being recognized or acknowledged is something that has enormous psychological and emotional importance to everybody regardless," Griffin said. "Our introduction to films is often Disney, and so that means a lot to parents like, you know, what are we exposing our children to? But [it] also means a lot to us individually in terms of these, the first movies that we really emotionally attached to, whether you're straight or you're LGBTQ."