What Would A Gas Tax Break Feel Like For Drivers? 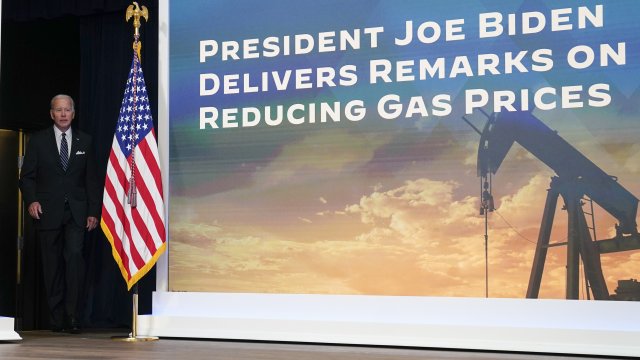 SMS
What Would A Gas Tax Break Feel Like For Drivers?
By James Packard
By James Packard
June 23, 2022
Even if the gas tax is lifted, gas companies could keep the savings for themselves or raise prices to fill the gap.

President Biden is desperately hoping for any price drop at the pump, as drivers coast to coast shuffle budgets to keep up with the sky-high cost of gas.

The president wants Congress to lift the 18 cents-per-gallon the federal government charges and is calling on states to suspend their taxes, too.

"No matter what the government does with the gas tax, there’s no guarantee that that will be passed to the consumer," said Craig Barkacs, business school professor at the University of San Diego.

Experts worry the small savings from any tax suspension won’t actually help consumers and think oil companies could try to keep the savings for themselves.

keep the cost to gas stations and – to you – the same.

"I call on the companies to pass this along, every penny of this $0.18 reduction to the consumers, this is there's no time now for profiteering," Pres. Biden said.

Without a federal gas tax, drivers with a 15-gallon tank would save just $2.70 per fill-up, and if you fill up once a week over the next three months, that’s a little over $32 you’re saving — if you actually get the savings.

Some states are considering pausing their gas tax, too, following suspensions in Maryland, Connecticut and Georgia, where most of those savings were passed along to drivers, according to a new analysis.

Other state leaders are pushing direct payments to drivers.

Indiana’s governor called a special session of the state legislature to approve $225 payments to the state’s taxpayers.

It's a more promising sign of relief at the state level while the president’s proposal remains caught up in politics and anything but certain.