What's Next For Haitian Migrants Who Made It To The U.S.? 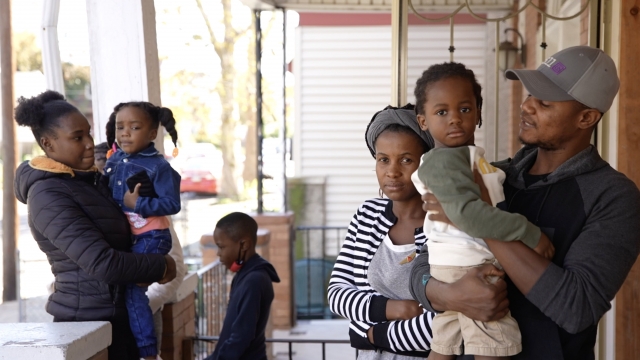 SMS
What's Next For Haitian Migrants Who Made It To The U.S.?
By Ben Schamisso
By Ben Schamisso
November 23, 2021
Families able to stay in the U.S. after fleeing are waiting to see how their asylum cases will play out, with one group taking refuge at a church.
SHOW TRANSCRIPT

One Haitian family is putting down roots in the U.S., far from the violence and instability at home, but their new life hangs in the balance as their asylum case plays out.

NEWSY'S BEN SCHAMISSO: What are going to be your main arguments when you make your asylum claim?

ASYLUM SEEKER CHRISTIAN DEZAMAR: I left my country because I saw that it was becoming a slaughterhouse, even the president was killed. I want what's best for my children ages 10 and 11.

Just two months ago, Cristian Dezamar and his family were among 14,000 Haitian migrants camping under a bridge by the southern border. While most of them were swiftly deported by the U.S., Dezamar's family was allowed to stay for now.

"I just want to have a job and a place for my family to live," Dezamar said.

He says he was right there when border patrol agents used their horses to prevent migrants from crossing back into the U.S.

"We had to go to Mexico to buy food," Dezamar said. "When we were returning one day, two guards came on horseback and caught a Haitian with the lasso, blocking the shallow part of the river."

The family avoided deportation because they have young children and sponsors in the U.S. to help financially. The sponsors are members of a Haitian church in nearby Philadelphia.

Dezamar's family needs to move out of their apartment by next week, though volunteers from the Beersheba Adventist Church have already found them another place to stay.

As the church's senior elder, Casseus leads efforts to support over 20 Haitian asylum seekers and counting, sponsoring their rent, food and supplies until they become self-sufficient.

SCHAMISSO: Why do you work so hard and put in so many hours to help Haitian asylum seekers?"

Like everyone in the congregation, Casseus is a Haitian immigrant himself. He moved to the U.S. in the '80s on a student visa and then got his green card. He understands what it's like to start from scratch in a new country.

"As they are being mistreated at the border, we felt the urgency to do something for them, especially when they are being released and they have no place to go," Casseus said.

At first, the church relied on donations from the community.

But once the word got out that the church was helping Haitians from the border, external donations started pouring in.

"As long as people will donate, we will be able to help a lot more of these families," Casseus said.

Even though the asylum seekers have to wait at least six months to get a work permit, the church is helping them earn some cash in the meantime.

"Sometimes we have people calling, 'I need to clean my house,' and then in return, they will give them some money and that give them some sense of pride," Casseus said.

Casseus is also connecting them to immigration lawyers to help them fight their asylum cases. Between 2019 and 2020, the U.S. denied 91% of all asylum cases from Haitian applicants.

"We approach it with a lot of hope, knowing that the judge will hear their case and will understand their situation and will allow them to stay," Casseus said.

Either way, Casseus is not done practicing what he calls "gospel in action" — fielding calls all day from the growing number of asylum seekers who rely on him to survive.