Western U.S. Suffering One Of The Worst Droughts In 500 Years 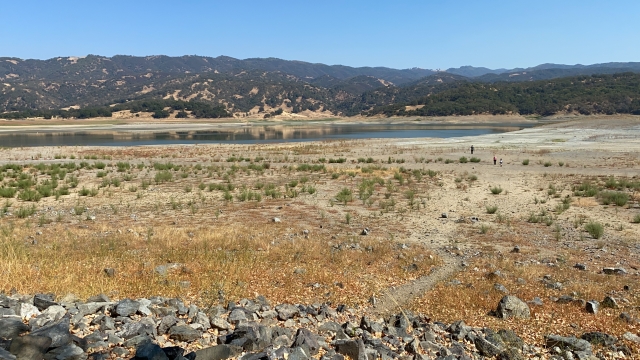 SMS
Western U.S. Suffering One Of The Worst Droughts In 500 Years
By Scott Withers
By Scott Withers
October 12, 2021
The megadrought is drying out a large swath of the country stretching from the upper Midwest to the Pacific Northwest.
SHOW TRANSCRIPT

Businesses are running out of water. Dairy farms can't grow food to field their herd. Reservoirs are drying up. The western half of the United States is struggling with a megadrought.

"A period of at least 20 years of substantially below normal precipitation. And we are in one of the worst megadroughts that has gripped the West in the last 500 years," said Kevin Perry, professor of atmospheric sciences at the University of Utah.

The current megadrought started in the year 2000. A megadrought does not mean there are drought conditions each year, but is identified when there is below normal precipitation for most years. Scientists use precipitation data and proxy data gathered from tree rings to identify and verify historic droughts.

The megadrought is drying out a large swath of the country stretching from the upper Midwest to the Pacific Northwest. The extent of the drought raising comparisons to another historic American drought.

"At this point, we're essentially at our lowest precipitation levels in 40 to 45 years, potentially even longer going back into the Dust Bowl era of the late 1930s,” said Erik Ekdahl, deputy director of the California Division of Water Rights.

California resident Connie Jenkins grew up in Northern California. She brought her family to Lake Mendocino for a picnic. Instead of finding a lake, she found a dry lakebed.

"Just never seen anything like it. People are usually fishing, swimming, enjoying themselves," said Jenkins.

Lake Mendocino was built in the 1950s to help control floods, create recreation and provide water storage. When full, the lake is 131 feet deep. Now, it is nearly empty, and state water officials predict it will be empty by December.

The drought Is not just drying up lakes, but it is also drying out forests and fanning massive wildfires.

So far this year, wildfires have burned more than 6 million acres of forests across the country.

The drought is hitting dairy farmers especially hard. Some farms are already selling off their herds.

"We are totally out of irrigation water for our pasture. If it continues, we probably will have to sell some more to just make sure we have enough feed to feed everything," said Doug Beretta, a California dairy farmer.

It's not just dairy farms suffering — vegetable and fruit farmers in the San Joaquin Valley are struggling to irrigate their crops. The Valley is the most productive agricultural area in the United States. Due to water cutbacks, farmers are forced to leave large amounts of their farms fallow.

"We've always known that a lack of water is a potential hardship for our farm. But to get to the point where it completely stops the farm — we never thought that would happen," said Joe Del Bosque, owner of Del Bosque Farms.

Along the picturesque California Pacific Ocean coast, the tourist town of Mendocino is running out of water. Businesses are closing their public toilets because there's not enough water to flush them.

California Gov. Gavin Newsom asked residents to voluntarily cut their water usage by 15%, but statewide, residents only reduced their usage by less than 2%.

The rainy and snow season in the western United States and specifically California runs from October through March. In order to break the drought, the region needs above-average precipitation.

"What you need is you need to have a change of the large-scale weather patterns, so that you end up with higher-than-average precipitation over a period of several years. In order to break the megadrought, one year of above-normal precipitation will not break the cycle that we're in for a megadrought," said Perry.