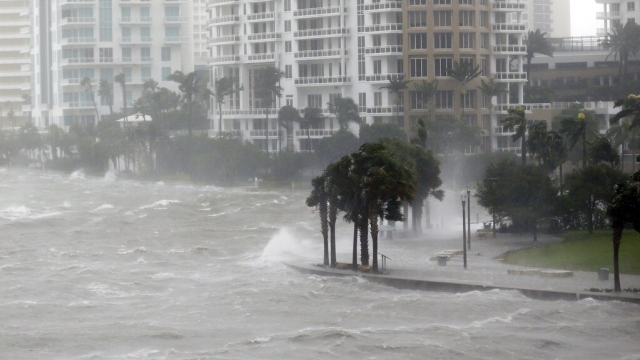 Upstate New York is home to some of the snowiest cities on the planet.

"We're going to have much milder winters, and much more precipitation," said Brendan Mehaffy, executive director of the Buffalo Office of Strategic Planning.

It's not a marketing slogan, but a climate change reality.

"There is no escaping climate disruption. Everyone will feel the effects and is feeling the effects now," said Ryan McPherson, chief sustainability officer at the University at Buffalo.

Fast forward a few decades from now, and the Great Lakes region will be more temperate. Like current-day Tennessee, there will still be snow, just not as much.

"The science is very clear. Temperatures are going to increase, and our climate is going to destabilize further," said McPherson.

We're already living through some of the severe threats: Sea level rise, heat waves, floods, wildfires and droughts. And they are going to intensify.

"It could accelerate pretty quickly, and I don't think as a country we are prepared for those changes that we could see," said Nicholas Rajkovich, an architecture professor at the University at Buffalo.

Some parts of the United States will be difficult to live in, sparking a large-scale climate migration and pushing people north toward the potential climate havens of Buffalo, Cleveland, Detroit and Duluth, Minnesota.

"In the next 25 to 50 years there will be a lot of people moving to these regions," said Rajkovich.

"Places that potentially are going to lose populations are along the coasts — areas that may be impacted by hurricanes, or like in California or Colorado, places that may have a lot of wildfires," said Rajkovich.

The havens will offer some refuge, providing ample fresh water, affordable housing and green infrastructure in cities with a desire to grow.

"It's not something in the future. It's already started. We've seen growth for the first time in 70 years and it was fairly significant," said Mehaffy.

Buffalo's leaders are already making plans to build infrastructure and to ensure current residents are not priced out of the place they've always called home.

"As you have more people move to regions, you're going to increase housing prices and potentially displace people from neighborhoods," said Rajkovich.

Students at the University at Buffalo are building a concept house future climate migrants could call home. The grow home is ultra-efficient, energy self-sufficient, heavily insulated, and would allow residents to grow most of their own food.

The university and city are both committing to being ready if and when climate migrants start to flow in.

"We only have about eight to 10 years to make a key difference with mitigation. That is an incredibly short period of time," said McPherson.

It's something professors who are also parents realize will impact their children.

"For my son, he probably doesn't want to plan on relocating to Florida anytime soon," said Rajkovich.

Or possibly any time ever.