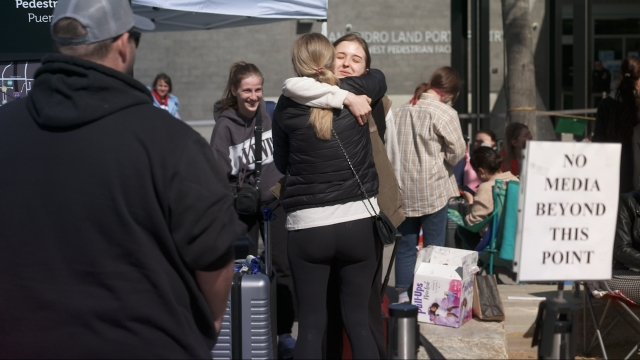 SMS
Volunteers, Church Groups Help Ukrainian Refugees In Mexico
By John Mone
By John Mone
April 14, 2022
The visa requirements in Mexico are less strict for Ukrainians, so refugees are arriving in Tijuana and then making their way to the U.S.

At the airport in Mexico the signs in Cyrillic catch their eyes. A Ukrainian flag and the words "We'll help."

They've landed in Tijuana, directed by volunteers from a loose network of Ukrainian churches in the U.S.

Oleskandr Zanozovskyi is with his wife and daughter. They're from western Ukraine. He told Newsy he's still coping with the anxiety of fleeing a war at home. They're among the dozens of daily arrivals and volunteers expect many more. The airport is the first link in this network. From there, they drive to a sports complex in this border city.

"This all volunteers. They're coming from churches and Christian organization. So, we have been here since first day," United For Ukraine Volunteer Coordinator Vlad Fedoroshyn said.

They come through Mexico because the visa requirements are less strict for Ukrainians. Plus, American consulate appointments in Europe where they first fled are scarce. COVID-19 restrictions on migrants crossing on foot have also been waived for them. Fedoroshyn is a Ukrainian immigrant helping coordinate efforts in the camp.

"We built our system with the numbers, so people is coming," he said.

An impromptu alliance of volunteers and church groups are the ones making this happen, the Mexican government has given them this spot of land, a respite center of sorts for the hundreds of Ukrainian refugees arriving at the border daily. And they're helping process anywhere from 50-70 of them to cross into the United States per hour.

"So, we're volunteers where we're saying that they'll be here till May 15. And everybody who will come after May 15, it's on their responsibility," Fedoroshyn said.

This is a grassroots effort on both sides of the U.S.-Mexico border – with limited resources.

"You know, we're a local church, but we have a global heart," Fedoroshyn continued.

It began a month ago at Pastor Phil Metzger's Calvary Church in Chula Vista, California

"Then it started just like spiraling, you know, more and more and more up to three, three fifty any given night for about two weeks straight."

He says the organization is held together by duct tape, glue and faith.

"I believe God put us right where we needed to be, right at this time. And we're grateful for it," Metzger continued.

As well as people like former TV reporter Maria Villalobos who gathered supplies and food to drive across the border.

"The Ukrainian refugees need our help," she said. "I've been down to Tijuana. I see their faces of sadness. They come in with one suitcase and their life changed in a blink of an eye. And this is the perfect assignment for me as someone who feels very close to both San Diego, to Tijuana, to help these Ukrainian refugees."

But in immigration policy, divine intervention also needs a government hand. Metzger and his allies say professional organizations need to step in.

"We're volunteers. We don't have enough cars. That's a huge one," Metzger said. "Number two: Russian speakers, either Ukrainian or Russian. They don't need to know what to say. We can teach them and how to help us."

The Christian pastor is urging the Biden administration to do more.

At the moment, the patchwork DIY refugee resettlement is all in the private sector, made possible by motivated volunteers many from the eastern European diaspora.