The Search For Life Beyond Earth 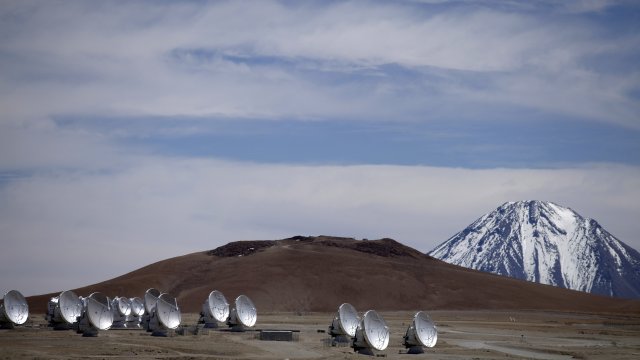 SMS
The Search For Life Beyond Earth
By Eli Kintisch
By Eli Kintisch
May 13, 2022
For as long as we’ve been gazing up at the stars we’ve wondered whether someone out there may be gazing back.

Last year the Pentagon released a report analyzing 144 unidentified flying objects since 2004, and says it could only explain one of them.

That doesn’t necessarily mean they’re  aliens, but questions about the heavens are nothing new.

For as long as we’ve been gazing up at the stars we’ve wondered whether someone out there may be gazing back.

In the seventeenth century astronomers and writers imagined worlds orbiting other suns.

But when we look for answers from out there, no one is phoning home.

Space is, however, teeming with radio waves from distant stars. Giant telescopes can hear them. Most of it is just noise. But these radio telescopes are listening for evidence of life. Scientists call it SETI: the search for extraterrestrial intelligence.

At the national Radio Astronomy Observatory in West Virginia, he aimed a giant antenna at two stars.

The experiments were called Project Ozma, named for the queen of the imaginary land of Oz. Drake didn't detect any signals. But he wondered: how many alien civilizations out there might we be able to detect?

Radio telescopes usually are tuned to measure cosmic objects like stars or quasars.

In 1977 there was even a false alarm, known as the Wow Signal.

NASA finally launched an official SETI program on Columbus Day in 1992, but some senators called it wasteful and soon canceled it.

So SETI remained low priority. Maybe that’s why the first planet scientists ever detected outside our solar system was in 1995.

Going forward, there are new proposals to reach extraterrestrials including transmitting a cosmic road map that could help aliens find Earth. Some warn that could be dangerous, since aliens may not all be friendly.