The Reality Of Abortion Today 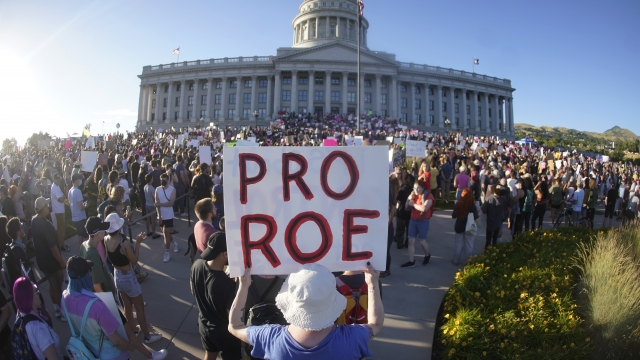 There are protests in nearly every major city — including Los Angeles, Seattle, Chicago, and New York.

And in our nation’s capital, where chants from dueling demonstrations and heated exchanges still ring through the air.

“This is part of the Republican party’s dark vision for America. They want to roll back every possible right that has been earned over the decades," U.S. Representative Veronica Escober said.

The Supreme Court’s decision to overturn Roe is already having a major impact, by allowing states to outlaw abortions and raising new questions about what whether women will be prosecuted for leaving their states — or receiving abortion medication by mail.

Over half of U.S. States are expected to ban at least some abortions — now with a green light from the nation’s highest court.

Mallory Carroll is the Vice President of Communications at Susan B. Anthony Pro-Life America.

“Roe put us in a status quo of abortion on demand, up until the moment of birth, oftentimes paid for by taxpayers. That’s what pro-abortion Democrats want. The pro-life movement at this point now, we have the freedom to have our debate in the public square and make our arguments for protecting life," Carroll said.

13 states are now set to ban nearly all abortions over the coming weeks. Some are already in effect — though a judge in Louisiana just halted that state’s law from taking effect.

On the other hand, at least 16 states and Washington, D.C. have enacted laws that keep abortion legal.

Asha Banerjee is an analyst at Economic Policy Institute.

“When women are not able to complete their education, or get the job they want, this has severe economic consequences. Yes for them, but this loss of economic potential of possibility will have ramifications for the state economy, the national economy as well," Banerjee said.

Advocates on both sides of the issue are adamant — the fight is far from over.

Abortion rights opponents say they won’t rest until it’s outlawed in every state and every legislature.

And abortion rights supporters, including President Biden, are encouraging voters to make their voices heard. Biden is fielding questions and reaction from other world leaders as he attends the G7 Summit in Germany.

"I regret what seems to me on to be a backward step. I'm speaking as someone looking in from the outside," Prime Minister Boris Johnson said.