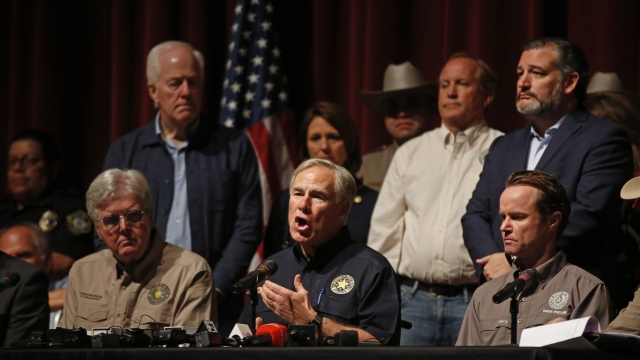 SMS
Texas Has Loose Gun Laws, But Gov. Abbott Hasn't Pushed For Change
By Newsy Staff
By Newsy Staff
May 26, 2022
Texas is in the spotlight this week as the national discussion around guns and mass shootings has reignited.
SHOW TRANSCRIPT

The tragic shooting in Uvalde, Texas, on Tuesday has already reignited a discussion around what can be done to prevent future mass shootings in schools.  Texas has one of the least restrictive gun laws in the country, and now it's at the center of the national debate on guns and mental health.

Last year, Texas' Republican Gov. Greg Abbott signed more than 20 pieces of legislation making it easier to buy, carry and own guns in the state, but there’s also been some change in the state’s mental health care resources.

Since September 2021, most Texans have been allowed to carry handguns in public without going through training or having a permit as long as they're over 21 years old, are not already prohibited by law from owning a firearm or haven’t been convicted of a felony or domestic violence.

Gov. Abbott signed this “constitutional carry” bill into law last summer. Now over 20 states have permitless carry in the U.S.

“You could say that I signed into law today some laws that protect gun rights, but today, I signed documents that instilled freedom in the Lone Star State," Gov. Abbott said.

Pro-gun activists had been pushing for permitless carry in Texas for years, but it hadn't gained much traction before. But when the 2021 legislative session began — after the mass shooting at an El Paso Walmart and a shooting spree in Midland and Odessa, Texas — the state legislatures decided to move forward and give people easier access to guns.

The thing is, most Texas voters opposed the idea of letting people carry handguns in public without a license. A University of Texas and Texas Tribune Poll found that 59% of voters were against it.

Along with the permitless carry bill, other pro-gun laws were passed, like one that allows community college school marshals to carry concealed guns rather than storing them. Another allows school marshals in grade schools to do the same.

While these laws have made it much easier for someone to carry a gun in public, one can't necessarily point to any of these being a factor in what allowed the tragedy in Uvalde to take place.

There is another law from Texas that’s been making headlines considering the shooter’s age.

In the state of Texas, people ages 18 or older are allowed to buy a long gun, like an AR-15. As Gov. Abbott pointed out this week, those rifles have been legal to purchase for a long time, and dozens of other states allow this too.

“The ability of an 18-year-old to buy a long gun has been in place in the state of Texas for more than 60 years," Gov. Abbott said. "Think about during the time over the course of that 60 years, we have not had episodes like this.”

The 18-year-old shooter in Uvalde, Texas, legally bought the weapon used in the tragic attack.

But the age requirements for other types of guns, like handguns, are a little more complicated. Last year, Texas lawmakers signed legislation allowing people ages 18 to 20 to obtain handgun permits under specific court orders, but experts say generally, the minimum age to carry a handgun in Texas is 21.

The exceptions allowing someone who is 18 to 20 years old to carry a handgun are very specific. The permit is only available if the young person has a restraining order and is in danger.

The gunman’s motives in the Uvalde school shooting are still unclear, but the governor has stood firm in his stance: that stronger gun control is not what is needed. Instead, he and other gun advocates in the state point to another factor.

"I asked the sheriff and others an open-ended question and got the same answer from the sheriff, as well as from the mayor of Uvalde," Gov. Abbott said. "The question was, 'What is the problem here?' And they were straightforward and emphatic. They said, '...We have a problem with mental health illness in this community.'"

When it comes to mental health care, Texas doesn't exactly have the best tools available for those who might need it. Currently, it ranks last out of all 50 states and the District of Columbia for overall access to mental health care. That's according to the 2021 State of Mental Health in America report.

Despite that, mental health hasn’t been a budget priority for Texas leadership. Back in April, Gov. Abbott actually cut more than $200 million from the department that oversees mental health programs.

As the Educational Fund to Stop Gun Violence found, just 4% of interpersonal violence cases in the U.S. are attributable to serious mental illness alone.