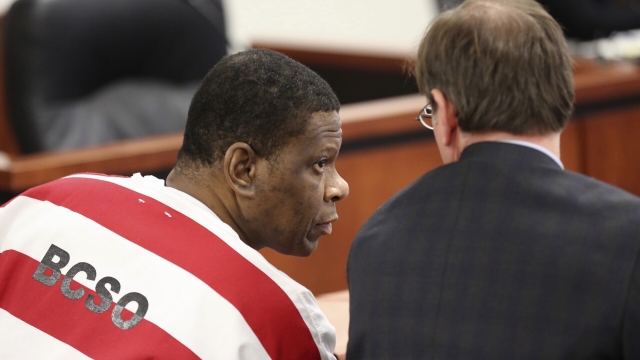 SMS
Texas Appeals Court Issues Stay Of Execution For Rodney Reed
By Alec Larson
By Alec Larson
November 15, 2019
New evidence in Rodney Reed's case has cast doubt on whether he is actually guilty of the 1996 murder of Stacey Stites.
SHOW TRANSCRIPT

The Texas Court of Criminal Appeals extended an indefinite stay to the execution of Rodney Reed on Friday.

Earlier in the day, the Texas Board of Pardons and Paroles voted unanimously to recommend a 120-day reprieve for Reed in light of new evidence that his supporters say raises doubts about his guilt. The court's ruling supersedes the parole board's vote.

The stay extended by the appeals court will send Reed's case back to trial court, where that new evidence will be considered. The court wrote that Reed's claims of innocence, the discovery of false testimony in his case and the revelation that potentially exonerating evidence was "suppressed" were all influences in its decision.

Reed was convicted of murder in connection with the 1996 killing of Stacey Stites. He was previously scheduled to be executed by lethal injection on Wednesday. But in recent weeks, his attorneys have provided a series of affidavits that support his claims of innocence.

Friday's ruling means Texas Gov. Greg Abbott will not have to act on calls for him to stay Reed's execution. The Dallas Morning News reports that since taking office in 2015, Abbott has only halted one imminent execution.