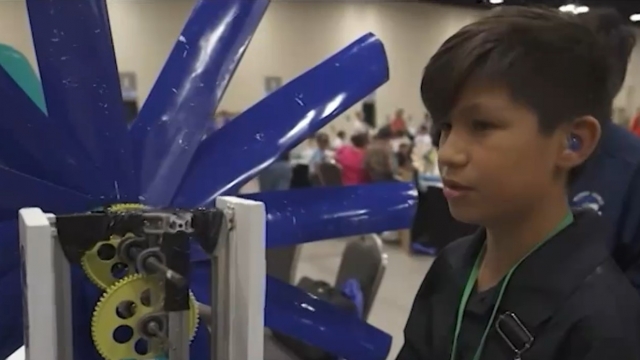 SMS
Students Build Wind Turbines In Competition Promoting Clean Energy
By Scott Withers
By Scott Withers
May 23, 2022
Students in elementary school through college are learning the importance of clean energy by building and testing wind turbines.

Wind power generates almost half of the country's renewable energy.

Most of the wind power comes from the Midwest and central U.S., with Texas at the top of the list.

At the annual KidWind Challenge in San Antonio, hundreds of students, from elementary through college, spent their time building, testing and perfecting wind turbines.

"A wind turbine is something that creates energy and it is not gas or coal energy," said Garrett Hartman, a student at Montgomery Elementary School in Pennsylvania and challenge participant.

The competition is also teaching kids about future job opportunities.

"In the renewable field, solar wind storage, we're going to need engineers, but also marketers, businesspeople — we're trying to show them the whole swath of the industry," said Michael Arquin, director of the KidWind Project.

While the goal is to encourage students to work together, it also helps feed excitement about science and engineering.

"Wind goes from the back and it makes the turbine spin and transports it in here," said Montgomery Elementary student Calen O'Neil, pointing to his project. "And the bottom one goes faster than the top one. ... And it transports it into a generator."

Eighth graders from Coachella, California, worked together to overcome some tech issues.

"We could build as a group and learn from our mistakes. If it was misaligned or something, we could fix it together," said another student from Bobby Duke Middle School.

Her team's turbine held together and made it through the wind tunnel, despite their worries.

Isacc Munoz from Bobby Duke Middle School added: "We have it taped because it spins very fast and there's a high possibility the blades can come out of the socket. We glued them and also taped them."

Across the hall, college students tested their high-tech turbines.

"It did really well. We got perfect scores on the power curve, safety, and we have one of the lightest structure weights in the competition this year," said JMU graduate Alexandra Davis.

Students of all ages are realizing the importance of wind energy.

"It can make us have a better life by not contaminating the Earth with fossil fuels," said Azael Zebadua of Bobby Duke Middle School.

The students recognize clean energy is their future.

"The fossil fuel industry is dying, for a good reason," Davis said.