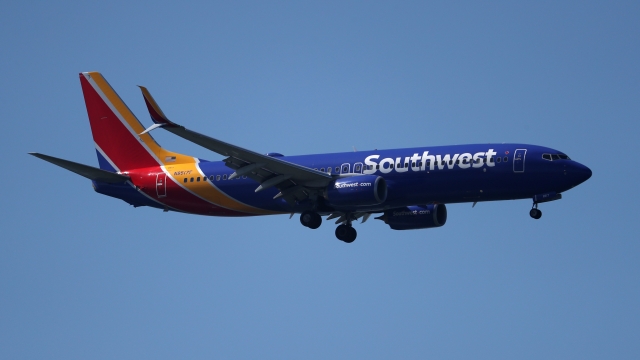 SMS
Southwest Has Taken The 737 Max Off Its Schedule Through August
By Meg Hilling
By Meg Hilling
February 13, 2020
Boeing expects the Max to return to service in mid-2020, but Southwest said it's canceling flights "proactively" due to "continued uncertainty."
SHOW TRANSCRIPT

Southwest Airlines is extending its cancellation of Boeing 737 Max planes until Aug. 10. The airline previously said it was removing the plane from its flight schedule through June 6.

In a statement released Thursday, the airline said the decision is the result of "continued uncertainty around the timing of MAX return to service." It added that the decision was made "proactively" and meant to reduce the possibility of last-minute flight cancellations or travel disruptions.

Southwest says this revision will remove about 371 weekday flights from its peak-day schedule of over 4,000 flights.

In January, Boeing said it expects the 737 Max will return to service sometime in the middle of 2020. The aircraft was grounded worldwide after two deadly crashes involving that model occurred within months of each other. Investigators believe the craft's flight-control system is at least partially to blame for both crashes.

Airbnb Sets Aside $250M For Hosts To Help With Cancellations

Supply Chain Expert: Stores Will Catch Up to Demand

American Airlines Says It Will Seek $12B In Government Aid

Macy's Will Furlough Most Of Its 125,000 Employees

Ford Teams Up With Manufacturers To Produce Medical Supplies

Unemployment May Hit 30% Because Of Coronavirus, Fed Official Says

Dollar General Hiring Up To 50,000 To Meet Coronavirus Demands

IRS Pushes Back Tax Day From April 15 To July 15

Nikki Haley Resigns From Boeing's Board Of Directors

McDonald's Closes Its Seating Areas, Asks Franchisees To Do The Same

Amazon To Hire 100,000 More Workers As Coronavirus Drives Up Demand

Coronavirus Outbreak Has Paused A Lot Of Small Businesses

United Airlines To Cut U.S. Flights Due To Coronavirus Outbreak

A Surge In Telecommuting Could Jeopardize Economic Growth

Lebanon And Japan Will 'Cooperate' In Former Nissan Chairman's Trial

How Businesses Abroad Are Dealing With The Coronavirus Outbreak