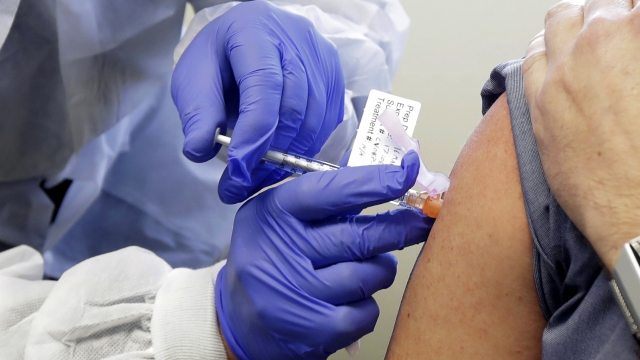 "I remember getting my test results at four in the morning and excitedly rushing to check them and being just devastated to learn that the vaccine had produced no immune response in me at all," Candida Moss said.

As a kidney transplant recipient, Candida Moss is at a high risk of catching COVID-19. So she rushed out to get vaccinated the first chance she could. But a test taken weeks after her second dose showed Moss' body never developed the necessary antibodies to protect her from the coronavirus.

Moss: "It's very scary. … It's very difficult for me to know, 'How do I navigate the world now [that] everyone is wandering about without masks on?'"

Moss isn't alone. A team at Johns Hopkins University found only 54% of fully vaccinated organ transplant recipients had antibodies. And those antibody levels were all lower than those measured in the general population.

Dr. Dorry Segev: "We expected a decrease, but we didn't expect this huge deficiency in the ability of transplant patients to respond."

Dr. Dorry Segev, one of the authors of the study, told Newsy that lack of immunity largely has to do with a class of immunosuppressive medication that patients like Moss have to take to prevent rejection.

Over 700,000 organ transplants have taken place in the U.S. since 1988. And Dr. Segev says another 10 million Americans with autoimmune diseases — like rheumatoid arthritis, lupus or Crohn's disease — take these kinds of antimetabolite drugs. More long-term research is needed to determine how well the immunocompromised will be protected against COVID, since they were largely excluded from initial vaccine trials.

In the meantime, Sally Satel — who also has a donated kidney — plans to get a third dose.

Satel: "If there were a shortage of vaccines, I would never do such a thing. … But there's some evidence that a third may produce some immune response."

Despite the research, Dr. Segev recommends transplant patients still get vaccinated. But he says they need to remain realistic about the risks.

Because of that, Moss and Satel both said the general population needs to do its part to help.

Moss: "For those of us for whom the vaccine didn't work, it's devastating to not know when this will be over for us and to no longer have the support of the rest of society in protecting themselves."

Satel: "I'm not asking you for an organ. We're just asking you to, you know, would you consider being vaccinated because it would be a great act of charity to people like me."

Only Female Soldier In Tokyo's Pentathlon Sets Her Eyes on Gold