Senate To Vote Next Week On Protecting Abortion Rights 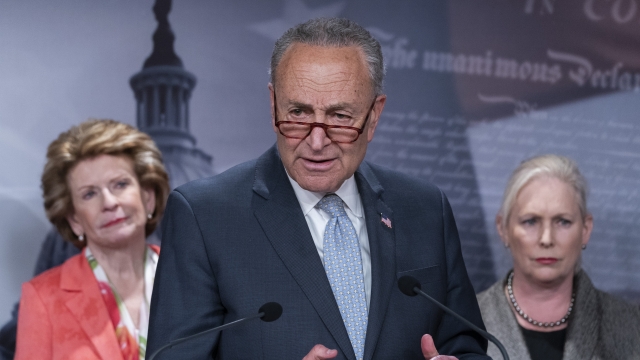 The Senate will vote next week on legislation that would codify abortion rights into federal law as Democrats mount their response to the Supreme Court's leaked draft decision that would overturn the landmark Roe v. Wade ruling.

The procedural vote, scheduled for Wednesday, will mostly be symbolic and once again show the limits of the Democratic majority in the 50-50 Senate. Majority Leader Chuck Schumer does not have the necessary 60 votes to overcome a Republican filibuster and move ahead with the bill, which means the effort is certain to fail. But he said members of both parties need to go on record about where they stand.

"Next week's vote will be one of the most important we ever take," Schumer said Thursday. "Because it deals with one of the most personal and difficult decisions a woman ever has to make in her life."

He insisted that bringing a bill to the Senate floor, after a similar measure failed in February, is "not an abstract exercise." The House passed legislation protecting abortion rights in September.

The Democratic leader is hoping to put every single member of his conference, as well as Republicans, on record on abortion rights as both parties deal with the political fallout from the leaked draft opinion that would overturn the 1973 ruling that legalized abortion nationwide. A final ruling, in a case from Mississippi, is expected this summer.

Democratic leaders, lacking the support needed to change Senate rules and pass an abortion bill on a majority vote, have signaled they intend to take the fight to voters during the campaign leading to the November election. Schumer noted that Republicans have been working for decades to bring about the end of Roe v. Wade. 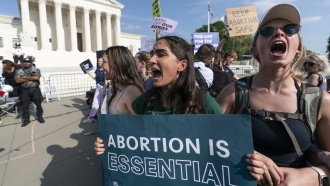 "Come next week, Senate Republicans will have to answer for everything they've done over the years to embolden the hard right's hostility against a woman's choice," Schumer said. "The vote will tell next week, America will be watching."

Sen. Elizabeth Warren of Massachusetts, who joined pro-abortion activists in protest on the Supreme Court steps Tuesday, reiterated how crucial it was — not just for her colleagues across the aisle, but for those in her party — to face voters on whichever decision they choose to make next week.

"It's about pressing everyone at every level of government, federal, state and local, to acknowledge what it will mean if women have to resort to back-alley abortions or to taking off days off work that they can't afford to get access to a medical procedure that has been guaranteed as a matter of constitutional right for nearly half a century," Warren said Thursday.

Republican lawmakers have long been laser-focused on the high court, installing conservative justices intent on revisiting abortion and other social issues, including three ushered to confirmation by Senate GOP leader Mitch McConnell of Kentucky during Donald Trump's presidency to build the court's solid 6-3 majority.

GOP lawmakers have focused their ire on the rare leak of the draft opinion, calling it a brazen attempt to pressure the justices into changing the ruling.

Urging the justices to stick to their process, McConnell promised that senators would "have their backs, no matter what."

On Thursday, White House press secretary Jen Psaki said President Biden was supportive of Democratic efforts to codify a right to abortion into federal law, but was pessimistic about its chances in the current Congress.

"He did not feel we had the votes at this point in time," Psaki said. "But certainly providing a moment for people to voice their view and voice their strong opposition to overturning Roe v. Wade is something we support Leader Schumer doing."