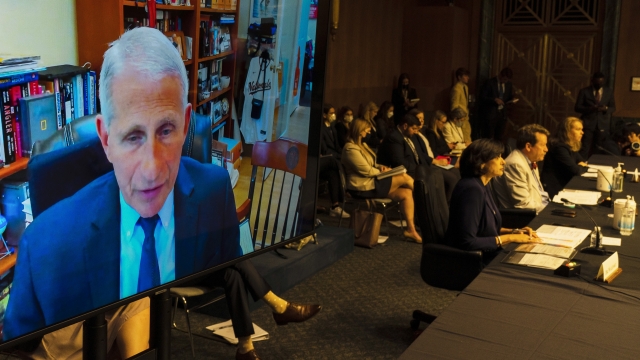 SMS
Senate Health Committee Held Hearing On State Of COVID Pandemic
By Kellan Howell
By Kellan Howell
June 16, 2022
COVID cases are trending upward again in the U.S. averaging over 100,000 new daily cases, up from under 30,000 in April, according to CDC data.

The nation's top health officials were in the hot seat again on Thursday, testifying in a Senate hearing on the state of the pandemic.

Dr. Fauci — who participated virtually after testing positive for COVID-19 —stressed the need for more funding to fight future variants of the virus.

"This virus is changing, and we need to keep up with it. In order to do that, we've got to do better with new vaccine platforms such as nano-particle vaccines. We cannot proceed with that unless we get additional funding. These are challenges that we have that I believe will be letting the American people down if we do not meet them," Dr. Fauci said.

Centers for Disease Control and Prevention Director Rochelle Walensky warned lawmakers that a lack of funding would also impair her agency's ability to combat other health challenges like monkeypox.

"We must not forget that this will not be our last public health challenge and we continue to face future public health threats," said Dr. Walensky. "As threats like Monkeypox emerge we run the risk of again being constrained by incomplete data from our fragmented public health data reporting system."

COVID cases are trending upward again in the U.S. averaging over 100,000 new daily cases, up from under 30,000 in April, according to CDC data.

Last week the Biden administration announced it was diverting resources away from testing and the strategic national stockpile in order to purchase more vaccines and therapeutics in anticipation of a fall surge.

But republican senators poured water on any hope of a funding deal.

Sen. Mitt Romney, who had previously tried to hammer out a funding deal, accused the administration of lying about its inability to pay for vaccines.

"For the administration to say they could not purchase these things and then after several months divert some funds and then purchase them is unacceptable," said Romney.

Sen. Richard Burr, the top Republican on the Committee, argued health officials had not provided a clear plan for how the money would be spent.

"This was designed to pressure Republicans to open a checkbook, sign the check and let the administration fill in the balance," said Burr.

The White House has asked for $22.5 billion in emergency pandemic funding.

WHO: COVID-19 Cases Rising Nearly Everywhere In The World

Taliban And U.S. Officials To Meet About Earthquake Relief Efforts

What To Know Now About COVID And Updated Vaccines