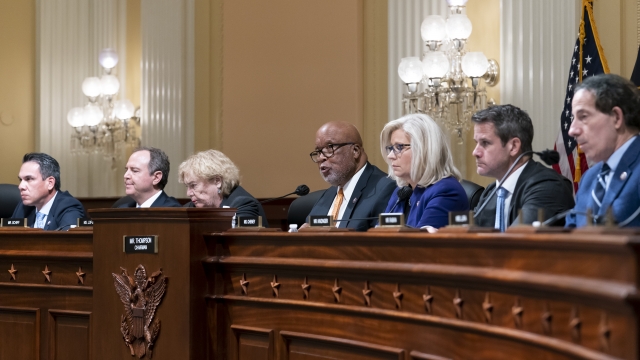 It's been a busy time for the select committee investigating the January 6 attack on the Capitol. After six months, nearly 4 dozen subpoenas and hundreds of interviews and thousands of pages of documents to comb through, in many ways the investigation is just getting started.

"We want to make sure that that never, ever happens again, so we need to get it right," committee chairman Rep. Bennie Thompson said.

As the bipartisan committee gears up for public hearings, the committee says it's finally penetrated the former president's inner circle to find out what went on inside the White House that day.

"The committee has first hand testimony now that he was sitting in the dining room next to the Oval Office watching the attack on television as the assault on the Capitol occurred," vice chair Liz Cheney said.

He continued to say that the account includes testimony that Trump's daughter, Ivanka, went in at least twice to ask him to stop the violence.

This information is just the latest as the committee trudges ahead, working to get details from those closest to the former president.

Tuesday evening, the panel requested an interview with Fox News host Sean Hannity saying they believe he had advance knowledge regarding the planning of Jan. 6 and had relevant communication while the riot was underway.

"We have so many of these texts and pieces of evidence indicating that he was outside of his role as a press person acting as a political operative," California Rep. Zoe Lofgren said.

They have asked for information about conversations from Congressmen Jim Jordan and Scott Perry, so far without success.

"We need to find out who was calling, who was texting, who was emailing during those 187 minutes," Thompson said.

The refusal isn't new to the committee, which has seen multiple witnesses buck the requests including former chief of staff Mark Meadows and adviser Steve Bannon — who have both been referred for criminal complaints.

Bannon has also been indicted on contempt of Congress charges. Meadows did provide some information to the committee, but then backtracked on cooperating.

His text messages — including with Fox News hosts, lawmakers and Donald Trump Jr. — reveal people from all sides of Trump world pushing for him to stop the rioters.

It took more than three hours that day to get this one minute statement from the former president: "It was a landslide election and everyone knows it. Especially the other side. But you have to go home now, we have to have peace."

Among those who testified were Capitol police officers who protected the members that day.

"At some point, I was dragged from the officers and into the crowd," Officer Michael Fanone said. "I heard someone scream, 'I got one!' as I was swarmed by a violent mob. They ripped off my badge, seized ammunition on my body. They began to beat me with hard metal objects. I heard chanting from some in the crowd, 'Get his gun. Kill him with his own gun.' I was electrocuted again and again and again with a taser."

The courts have been the biggest hold up since the committee formed July 1. As former aides fight subpoenas, the former president fights the release of his own documents to the committee. He's lost in every lower court and has now appealed to the Supreme Court to block it. There's no timeline on when the court will weigh in. The committee is also looking for information on the funding of the Stop the Steal rally that morning.

Since the committee's formation, the two Republicans serving — vice chair Liz Cheney and Congressman Adam Kinzinger — have been ostracized in their own party.

In a letter to his colleagues, House Minority Leader Kevin McCarthy — who once condemned the former president for the attack — now says the focus should be on the security lapses that lead to Jan. 6.

McCarthy may be called before the committee to discuss his actions that day.

Thompson says the committee will report any crimes it finds to the Department of Justice. A full report is expected this summer. Meanwhile, the DOJ says it is working the largest investigation in history — charging more than 725 defendants for their role in the insurrection.

How Do Sanctions Work?

Should Congress Be Able To Freely Trade Stocks?