Studies Show Pedestrian Deaths Are Increasing Across The Country 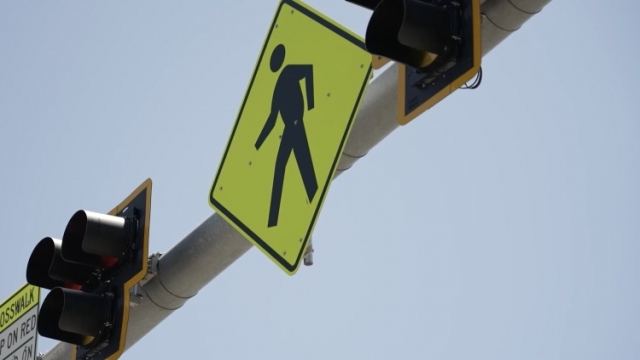 SMS
Studies Show Pedestrian Deaths Are Increasing Across The Country
By Haley Bull
By Haley Bull
April 28, 2022
An analysis by the Governors Highway Safety Association projected a 17% increase in pedestrians killed in the first six months of 2021.

Across roadways in America, a grim reality is driving calls for change as more people walking are killed. Studies show pedestrian deaths have gone up by at least 45% over the last decade.

An analysis by the Governors Highway Safety Association projected a 17% increase in pedestrians killed in the first six months of 2021.

“He had said ‘I’ll be back’ and I said ‘enjoy your walk, I love you.’ And he walked out that day and your life can just change in a moment,” said Marissa Kursh Cohen. “One irresponsible moment from somebody else you know a stranger has changed our lives forever.”

David Kursh, Marissa’s father, was a beloved grandpa, father, husband. He ran a family business for decades, was a talented woodworker and had started spending winter in Florida.

“David was a wonderful person,” said his wife Debra Kursh. “He was very happy, he was energetic, he was loving, he was so family oriented.”

“That was like his favorite thing, to spent time with his grandsons,” said Marissa, who shared home videos of him playing with her two sons.

He was also an avid walker. Debra said he would walk 5 to 7 miles when he went out, but stuck within their plan in Florida wary of the accident rates. In April 2021, his family said he decided to walk to the bank across from the neighborhood. While he was in the pedestrian crosswalk, his family notes with the signal to walk, a driver turning right hit him.

He fought for two and a half weeks following the crash, his family said, and saved others' lives through organ donation.

“We’re trying to walk in our new footsteps without him and we have a hard time making it through each day. It hasn’t gotten any easier,” said Debra.

“What part of our lives has not been affected? Everything before the crash is no more. Like we don’t have that life anymore, it’s a totally new life,” said Marissa.

His family said the support of their relatives and friends have helped them, but they now live with a new future, thinking of him in each moment. They’ve joined the organization Families for Safe Streets.

“We have to try to save as many people as we can. We have to try to take our anger, our sadness, our longing for the life we had and try to push this new life in a good direction and make him proud of us,” said Debra.

Because they and so many others say one death, is too many.

The GHSA analysis found there were 1.04 pedestrian deaths per 100,000 people, up from the previous two years. Each death impacts immeasurable lives.

The report points to a combination of dangerous driving, larger vehicles, roadways that prioritize fast moving traffic over safer speeds for pedestrians and inadequate infrastructure.

“Fatalities in the United States are substantially higher than in any other developed country,” said Beth Osborne.

Osborne is the director of Transportation for America, what Smart Growth America describes as its transportation arm.

“We are on a system that makes our own responsibility like as a driver trying to protect ourselves unsafe by pushing us to drive higher and higher speeds. As a pedestrian it forces us to run out into traffic without a clear crossing,” said Osborne.

“The danger is because of the design of the roadway. The reason these are the people who bear the brunt of the problem is lower income people and people of color are more likely to have to move around without a vehicle. That is a huge expense to put on people. And because of the way we design our communities and roadways they often have to be utilized for people to go very short distances, even 3 or 4 blocks. Therefore we designed people’s lives where every single trip no matter how short requires a car. Then we used that as an excuse to build the roadways only for cars,” said Osborne.

The report found nine of what it considers the 10 most dangerous states were in the south. It also found 84 of the 100 largest metropolitan areas grew more dangerous in 2019. It ranks areas based on what it calls a pedestrian danger index. Seven of the top ten areas with the highest numbers were in Florida, with the Orlando region topping the list despite an improved score.

“This issue has built up over decades of development and land patterns, so it’s something that doesn’t have a simple fix. So we have to address it from a lot of different angles,” said Cynthia Lambert, with MetroPlan Orlando, a regional transportation planning group for Central Florida.

Lambert said they look at it through enforcement, education and engineering.

“This is Orange Blossom Trail. It has historically been one of our highest crash corridors for pedestrians here in Central Florida,” Lambert said of the roadway where Lambert and Newsy met.

Lambert said the corridor is the first to get a new type of pedestrian signal in Central Florida. When a pedestrian hits the button to cross, drivers get a red light, not just for oncoming traffic but for cars turning right ahead of the crossing.

An Orlando city spokesperson said a top priority is the safety of the community. The spokesperson said the city is making investments to enhance safety, including implementing complete streets policy, enhancing pedestrian signals and crosswalks and completing the Downtown Loop for a car free option. The spokesperson said last year the US Department of Transportation awarded the city a grant to look at six corridors and identify improvements needed to work toward a vision zero goal.

This year the US Department of Transportation unveiled the National Roadway Safety Strategy that aims to reach zero roadway fatalities, it says includes funding from President Biden’s infrastructure law. The agency said it in part aims to work with partners on efforts including a Complete Streets initiative.

“I want to see more space for pedestrians, I want to see more frequent crossings on roadways, I want to see overall speeds come down and I want to see US DOT and the auto manufacturers recognize the driver should not be blinded to what is in front of their vehicle," said Osborne. "I can’t believe I have to make that statement. Where there’s conflict we have to slow traffic down. We have to help the traveler and our policy makers understand when you come into heavily developed high conflict zones it’s in your interest to move slower.”

“Both accidents happened in about a mile of either direction of my house, so I can’t go anywhere without seeing it or thinking about it,” said Miriam Moore.

Moore’s loved ones were both hit and killed by larger vehicles.

Her daughter, Amber, was killed while on a motorcycle.

“She was very much a free spirit, she kind of did things her way, she marched to the beat of her own drum. She loved country music, loved motorcycles and she was a truck driver and she knew a lot of people from all over the United States,” said Moore.

Her mother, Mary, was walking her dog, something she did every day.

“She loved Jesus. I don’t know how else to put it. She loved her dogs, did professional dog training, she was a musician, she was a teacher when she was younger and she just loved her animals,” said Moore. “She was just somebody that everybody loved, she was just kind to everybody.”

Like so many others, she now has to live without them, helping her grandson, Conner, remember his family.

Moore calls for more safeguards to protect people and for people to take steps too. Working in homeless prevention services, she said the issue has always been important to her.

“They were people, they weren’t numbers. You hear statistics about so many people died this year or the last ten years in traffic crashes. That was somebody’s mom, that was somebody’s daughter, that was my grandson’s mother. They’re people that we can’t get back. And they were preventable accidents, very preventable. People weren’t paying attention,” she said.