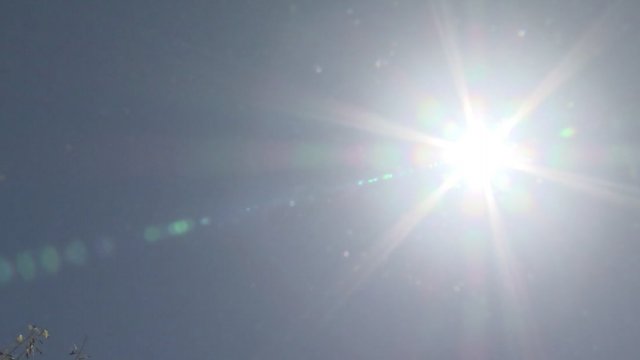 Temperatures are heating up in the Arizona Desert.

May marks enhanced surveillance season in the sizzling sunny state to help prevent deaths. Public cooling centers opened their doors May 1 and the city plans to turn an old department of transportation building into a shelter.

"What we intend to do is provide a 200-bed shelter," said Scott Hall with the Phoenix Human Services Department.

At the end of March, Arizona hit its first 90-degree day of the year and broke a 93-degree record set back in 1993. And it's expected to get hotter.

The National Oceanic and Atmospheric Administration projects extreme heat and drier conditions in the West during June, July and August. The bull's-eye covers Utah, Colorado, Wyoming, Idaho and parts of other states.

Dr. Hosmay Lopez is an oceanographer at NOAA.

"Extreme heat is the No. 1 weather-related cause of death in the U.S. ... For the past 10 years, heat streams have been responsible for deaths topping hurricanes, flooding, tornadoes, lightning," Lopez said.

Experts, like University of Arizona Associate Professor Dr. Gregg Garfin, say the first days of the heat wave are the most dangerous.

"There's been some research that even shows that the most fatalities are not necessarily on the day with the highest heat, but as you're entering the heat waves episode, because again, it catches people off guard, particularly people who have preexisting health conditions," Garfin said.

A journal by Earth System Dynamics under peer review breaks down the death toll of the long heat wave in the Pacific northwest that shattered all-time record highs. There were more than 1,000 deaths in Washington state, Oregon and Canada.

"There are regions where extreme drought will lead to extreme temperatures," according to Lopez. And vice versa. Dry weather and extreme temperatures are fuel for wildfires. The Tunnel Fire in Arizona exploded across more than 20,000 acres at the end of April. It's now 95% contained.

"All you need is an ignition," Garfin said. "And that's going to create kind of a like a carpet of fire. It's going to contribute to the spread of fire."

To help better respond to the impacts of heat, a company called "Hydrosat" is turning to infrared satellite images to measure the earth's surface temperature.