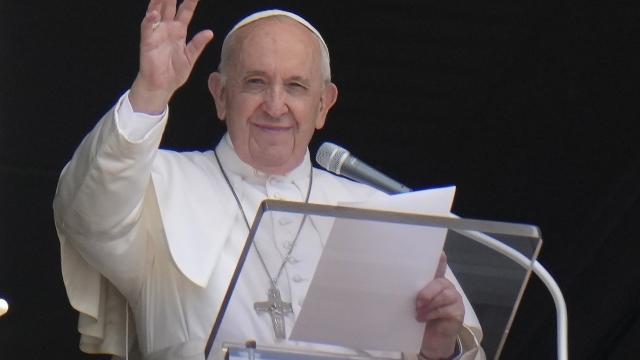 Pope Francis was “in good, overall condition, alert" and breathing on his own Monday, the Vatican said a day after the pontiff underwent a three-hour operation that involved removing half of his colon.

Francis, 84, is expected to stay in Rome’s Gemelli Polyclinic, which has a special suite reserved for popes, for about seven days, assuming no complications, Vatican spokesman Matteo Bruni said.

The Vatican has given few details about the procedure, but an Italian newspaper reported, without citing sources, that surgeons began the operation laparoscopically but ended up having to operate with wider incisions after encountering unspecified complications.

Monday's brief medical bulletin — which came more than 12 hours after the end of Sunday’s surgery and contained the first details from the Vatican — mentioned no such complications. The Holy See said the pope needed the procedure because of a narrowing of a portion of his large intestine that doctors say can be quite painful.

When the Vatican announced on Sunday afternoon that Francis had been admitted to hospital, it said the operation had been planned.

“His Holy Father is in good, overall condition, alert and breathing spontaneously,” Bruni said in a written statement, adding the operation lasted about three hours.

The procedure generally entails removing the left side of the colon and then joining up the remaining healthy parts of the large intestine. But the Vatican didn't elaborate.

Doctors said that a risk of the operation is that the connection between the joined-up parts of the colon fails, causing more pain and possibly an infection. Such a failure is very rare but would require another surgery.

Without citing sources or specifying what happened, Rome daily Il Messaggero reported that “complications” arose during the surgery. The newspaper said that led surgeons to switch from working laparoscopically to operating through a larger incision.

Laparoscopy is a kind of surgical procedure often dubbed “keyhole surgery” that typically allows surgeons access with very small incisions. In the kind of surgery the Vatican said the pope was getting, laparoscopy is commonly used, experts have said.

Before the Vatican bulletin was released, Cardinal Enrico Feroci said he had heard from another cardinal, Angelo De Donatis, that the pope was doing OK.

“He told me that the pope is well,” the Italian news agency ANSA quoted Feroci as saying. De Donatis is the vicar of the Rome diocese.

Francis is staying in a special, 10th floor suite that the hospital keeps available for use by a pontiff, after Pope John Paul II stayed there several times for various medical problems.

It was unclear when the Vatican might issue a new medical update.

Francis’ next routine appointment with the public would normally be on Sunday, July 11, when he customarily appears at a window overlooking St. Peter’s Square and blesses the faithful below and speaks for a few minutes, often about current events.

If he were still hospitalized then, Francis might opt, if he feels up to it, to do what one of his predecessors did when recovering at Gemelli Polyclinic. St. John Paul II, during some of his multiple hospital stays, appeared at his room’s window to wave and bless well-wishers gathered outside.