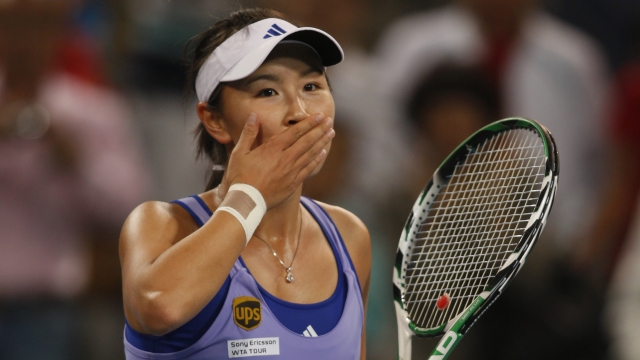 SMS
Case Of Peng Shuai Puts China's #MeToo Movement Back In Spotlight
By Patrick Fok
By Patrick Fok
November 29, 2021
The tennis star seemingly vanished from the public eye after alleging she was coerced into having sex with a former government official.

The case of Peng Shuai has put China's #MeToo movement back in the spotlight.

The tennis player made global headlines when she vanished form the public eye for two weeks after alleging she was sexually abused by a former, high-ranking government official.

Zhang Gaoli retired as vice premier of China in 2018 and was previously part of the top ruling political body headed by Xi Jinping.

Mention of Peng Shuai has been heavily censored in China, but many people are still aware of the case.

The former Wimbledon doubles champion has since reappeared. She spoke Sunday with the head of the International Olympic Committee but fears over her safety haven't gone away.

"The reaction is clearly influenced," one member of a rights group called Free Chinese Feminists said. She asked to have her identity concealed for protection.

"We should go back and look at the issues itself," she said. "It's about Peng Shuai going public with her story and we should demand she be free to move and for an independent investigation into the sexual abuse allegations."

She says China's #MeToo movement gained momentum in 2018 as the world was focused on the Harvey Weinstein scandal. But recent events have cast doubt over women's rights in the country.

Earlier this year, a court in Beijing ruled against former media intern Zhou Xiaoxuan in one of the nation's most prominent #MeToo cases.

Zhou alleged she'd been sexually harassed by a prominent TV personality. The court said there was insufficient evidence to support that claim.

That came amidst a government-led crackdown on celebrity culture in the country, but critics say the Peng affair shows some people in authority still can't be touched.

William Nee is a researcher for a group called Chinese Human Rights Defenders.

"I think this sends a bad message to feminists and other people because they now think if one of the most prominent Chinese people in the world — who has had a lot of international friends and international attention — can speak up and be censored across the board ... then what luck would I have," Nee said.

The Chinese government has yet to comment on the claims made by Peng and won't say whether it intends to investigate the allegations.

The World Remembers The Holocaust As Antisemitism Rises In Pandemic