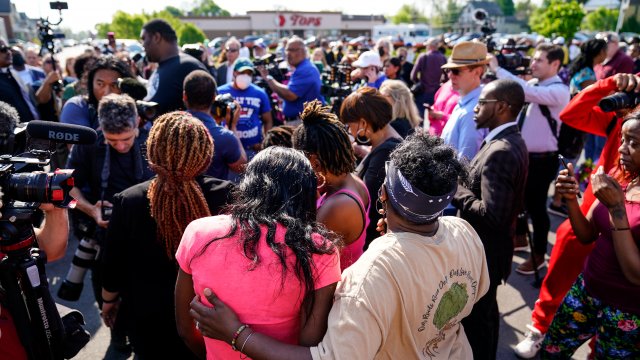 "How is the community going to go back to that Tops?" Buffalo resident Michael Ray said. "It’s the first thing they’re going to think of now.”

The community has faced ongoing threats since Saturday’s shooting.

“ I want to be clear Buffalo police and our partnering law enforcement agencies standing here are investigating these social media posts and will prosecute if necessary," Buffalo mayor Byron Brown said.

The target is Black people.

"Pretty much all the stores in the city shut down from Tops, Walmart, Sam's Club," Martin said.

Area schools have also received an uptick in threats, but police say they’re not credible.

On Sunday, a 52-year-old Buffalo man was arrested for allegedly making threats against local businesses while referencing the grocery store shooting.

"A terrorist came into my home, which is my community, and wreaked havoc on my neighborhood," said Zeneta Everhart, the mother of a shooting survivor.

"My friend's granddaughter was in the freezer," Martin said. "He was shooting at the freezer, and luckily, he just kept hitting metal."

Martin is a community activist in Buffalo. He says Black people in the city are now determined to police themselves.

"God forbid if somebody else comes comes around here looking suspicious, we're on high alert," Martin said. "But the last thing we want is for anybody else to get hurt, so I want that to be known. But we're on high alert. We're not tolerating any more."

Psychiatrist Flavia Desouza says these sorts of traumas have a psychological impact on the entire community.

"If we're thinking about the grief process and applying that not just to the individual, to the community, you can expect that a person might feel shock, they might be in denial, they might experience rage," Desouza said.

Desouza is a professor at Howard University, a prominent historically Black university that faced its own set of threats earlier this year.

"It does not take a national event like this for people to talk about what's happening in their communities or the oppression that they've felt holds their psyche and their day to day," Desouza said.

According to the FBI, so-called hoax threats increase after major tragedies.

But hoax or not, the fear and anger is real for these communities.

"If whole communities or individuals have their experiences invalidated, that prevents really healing from moving forward," Desouza said. "And that's why community and truth are so important, because in community we experience a sense of validation of our experiences."

Martin says that's exactly what they intend to do.