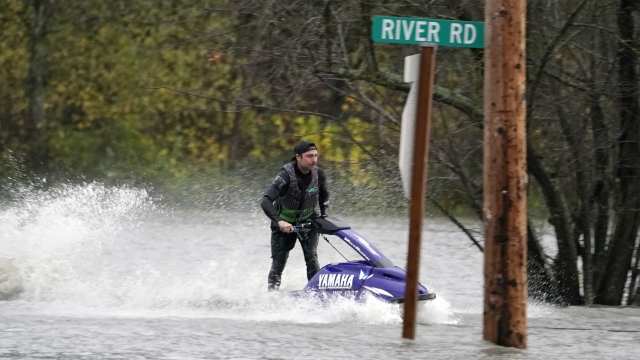 Several days of heavy rains from an atmospheric river are causing large areas of Washington state to flood, with hundreds of residents forced to evacuate after the state's governor issued a state of emergency for 14 western counties.

The city of Bellingham has been swamped by rain pushing the Skagit River out of its banks.

Cars are submerged to their roofs, and residents are using kayaks to search buildings and cars for survivors after mudslides forced the closure of a large portion of Interstate 5 near the Canadian border.

The Coast Guard rescued ten people from fast-rising flood waters. It brought in helicopters to help others, rescuing a stranded motorist, people from their roofs and a woman clinging to a newborn in a basket thrown around by strong winds — all brought to safety inside the helicopter.

Even long-time residents were shocked by the intensity and speed of the floodwaters.

"The river is definitely getting quick up here," a resident said. "I haven't seen a storm like this in years, and I've lived in this valley my whole life."

Strong winds with gusts up to 90 miles-per-hour whipped up massive waves on the Salish Sea surrounding the San Juan Islands.

The winds and the waves tossed the water ferries, too, though fortunately the ships made it to safety.

On shore, the dangerous winds toppled a semi-truck on the Deception Pass bridge, and the heavy rains created mudslides along the mountainous terrain, with the mud and debris blocking a large portion of the main Interstate 5.

The storm has left tens of thousands of people throughout the state without power.