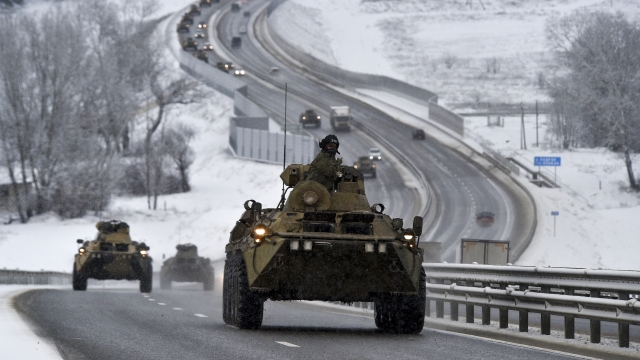 SMS
'Normandy Format' Advisers Meet In Paris Over Russia-Ukraine Conflict
By Associated Press
By Associated Press
January 26, 2022
Diplomats from Russia, Ukraine, Germany and France are holding talks in attempt to broker a peace deal similar to one agreed upon in 2015.

A senior representative of the Russian government arrived on Wednesday for talks in Paris amid high tensions between Moscow and the West over Russia’s alleged designs on Ukraine.

The talks are taking place in the so-called "Normandy format," involving advisers from Russia, Ukraine, Germany and France.

France and Germany took the lead in brokering a 2015 peace deal between Ukraine and the Russia-backed rebels, using the Normandy diplomatic mechanism.

It helped ease hostilities in 2015, a year after Russian President Vladimir Putin ordered the annexation of Ukraine’s Crimean Peninsula.

The political advisers are meeting in Paris amid growing concern that Russia could soon make a military move on Ukraine.

Moscow has denied it is planning an assault, but it has massed an estimated 100,000 troops near Ukraine in recent weeks and is holding military drills at multiple locations in Russia.

Russia has warned it would quickly take “retaliatory measures” if the U.S. and its allies reject its security demands and continue their “aggressive” policies.

At the heart of the standoff are questions about Ukraine's future: Russia has demanded guarantees that NATO will never admit the country and other ex-Soviet nations as members and that the alliance will roll back troop deployments in other former Soviet bloc nations. Some of these, like the membership pledge, are nonstarters for NATO, creating a seemingly intractable stalemate that many fear can only end in a war.

NATO said this week it was bolstering its deterrence in the Baltic Sea region and the U.S. ordered 8,500 troops on higher alert for potential deployment to Europe. Western nations have also sent planeloads of weapons to help Ukraine strengthen its defenses.

Amid the escalating tensions, Ukrainian officials have sought to calm nerves.

Ukraine’s Foreign Minister Dmytro Kuleba said Wednesday that while the concentration of Russian troops near Ukraine poses a threat, “their number is now insufficient for a large-scale offensive.”