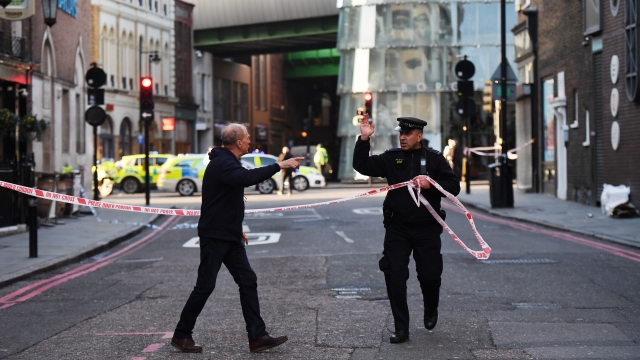 SMS
Multiple People Dead After 'Terrorist Incident' Near London Bridge
By Alec Larson
By Alec Larson
November 30, 2019
U.K. police ​confirmed at a press conference that the suspect was shot and killed at the scene.
SHOW TRANSCRIPT

A terrorist attack near London Bridge has left two people dead and three others injured, as police continue to investigate the circumstances of the incident.

The attack reportedly began around 2 p.m. at an event organized by the University of Cambridge's Institute of Criminology. According to CNN, the suspect attended the event and began his attack after threatening to blow up the building while wearing a "very convincing" "hoax" explosive device.

Multiple attendees then attempted to stop the attacker, who reportedly had knives strapped to his hand, before he left the building and ended up on London Bridge. Civilians were able to subdue the attacker until police showed up. He was shot and killed at the scene once bystanders had been dispersed.

Police say that a man and a woman were killed in the knife attack, and three others were injured and remain hospitalized.

The suspect had reportedly pleaded guilty to terrorism charges in 2012, and was released in December 2018 after serving less than half of his 16 year sentence.

In a statement, Prime Minister Boris Johnson said, "I want to thank the emergency services and members of the public for their immense bravery in responding to this suspected terrorist attack at London Bridge. This is an appalling incident and all my thoughts are with the victims and their families."

The country had just downgraded its terrorism threat level from "severe" to "substantial" earlier this month.

The White House said President Donald Trump had been briefed on the attack and was "monitoring the situation." A spokesman said on Twitter: "The United States strongly condemns all horrific acts of violence on innocent people, and we pledge our full support to our Ally, the United Kingdom."

Assistant Commissioner Neil Basu said in a statement that there would be "an increased police presence throughout the weekend" and "enhanced police patrols across London of both armed and unarmed officers."