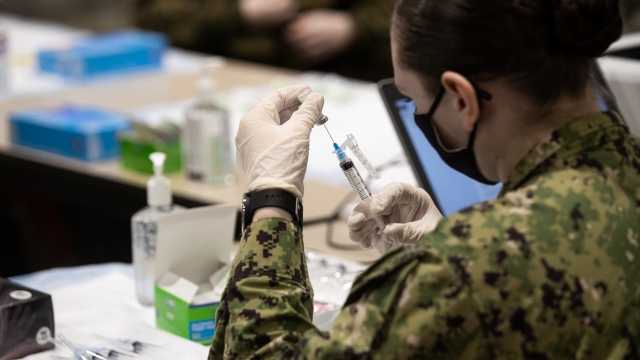 SMS
Marines Face Vaccination Deadline
By Terace Garnier
By Terace Garnier
November 23, 2021
Both the commandant and the sergeant major of the Marine Corps encouraged Marines to get vaccinated before the Nov. 28 deadline.
SHOW TRANSCRIPT

As the Nov. 28 deadline quickly approaches, up to 10,000 active duty Marines will likely not be vaccinated against the coronavirus. This comes after both the commandant and the sergeant major of the Marine Corps encouraged Marines to get vaccinated earlier this month.

"We don't have extra Marines, we are a pretty small force and we have to make sure that everybody on the team is ready to go all the time," Gen. David H. Berger said.

Recent statistics show 94% of the force is fully vaccinated.

Other branches are experiencing similar numbers. Some 9,600 airmen refused to be vaccinated by the Air Force's Nov. 2 deadline.

Roughly 800 troops in the Oklahoma National Guard say they will not get the vaccine before their June 2022 deadline. That's 13% of their more than 8,000 members.

But in this instance they were told they are not required to get the vaccine, causing a debate about whether commanders should follow the orders of their governor or the Pentagon.

According to the adjutant general for Oklahoma, Brig. Gen. Thomas Mancino, the policy they are implementing is not anti-vaccine.

He said in a statement: "I and the governor are both vaccinated. I encourage all our Oklahoma Guard members to get vaccinated if they choose to do so. We want to educate and inform our soldiers and airmen so that they can make an informed decision regarding the DOD vaccine mandate."

But according to Pentagon spokesman John Kirby: "We are aware of the memo issued by the Oklahoma adjutant general and the governor's letter requesting exemption. We will respond to the governor appropriately. That said, Secretary Austin believes that a vaccinated force is a more ready force. That is why he has ordered mandatory vaccines for the total force, and that includes our National Guard, who contribute significantly to national missions at home and abroad."

Many branches have given a short window for those who have not been vaccinated to do so before being discharged. But for the Guard, the Secretary of the Army sent out a memo stating any unvaccinated soldiers will be flagged, which can cause them to lose benefits such as promotions, awards and bonuses.