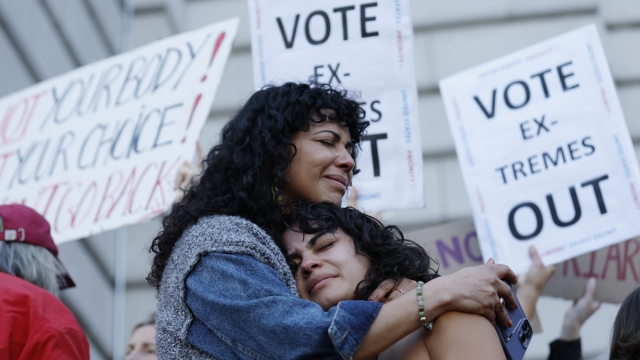 SMS
Mexico Shipping Abortion Pills To U.S.
By Adi Guajardo
By Adi Guajardo
June 27, 2022
The Guttmacher Institute says in 2021, more than 100 measures had been introduced in states aimed at restricting medication abortions.

The understanding of abortion as a surgical procedure is a common one — clinics where they occur are often the front line for protests. But more than half of pregnancy terminations in the U.S. are through pills — a two-step procedure that has become much more widespread over the last 20 years.

The Guttmacher Institute, which favors abortion rights, says in 2021 more than 100 measures have been introduced in states aimed at restricting medication abortions.

But help for American women seeking abortion pills is coming from a place some might find surprising — Mexico.

Sandra Cardona is the founder of "Red Necesito Abortar" in Mexico. She says in recent months, she's seen a spike in American and immigrant women reaching out on social media seeking an abortion.

Her organization is working with other groups in Mexico along the U.S. border to increase access to abortion medication. She says her organization worked it out with networks in the U.S.

Cardona's foundation discretely mails abortion pills approved by the FDA to at least three groups in the U.S. who can directly mail the medication, at no cost, to women who want them. It also helps women who visit their office in Mexico.

In 2000, the FDA approved mifeprestone in the U.S. as part of a regimen with misoprostol. Together, they're an approach to abortion that is considered safe and effective for pregnant women.

"It's not hard to get the medication here," Cardona said, citing the treatment being only $30.

In the U.S., the care starts at nearly $250, according to online providers, and goes up from there.

"I don't want a single woman to be left without a right to make decisions about their body," Cardona said.

But the legalities tied to their efforts can be hazardous to navigate.

Rafa Kidvai is with the Repro Legal Defense Fund, which is a helpline run by a U.S.-based advocacy group called "If/When/How: Lawyering for Reproductive Justice."

"People are concerned more than ever and absolutely are reaching out through our Repro Legal helpline," Kidvai said.

NEWSY'S ADI GUAJARDO: What are the repercussions of getting abortion pills from another country, like Mexico?

RAFA KIDVAI: Right. I mean, I think those are the exact instances in which for a lack of access, people have been criminalized for self-managing their abortions.

In Texas, it is a crime to send abortion medication through the mail and Kentucky and South Dakota lawmakers also passed bans. In 2014, a mother in Pennsylvania was charged and went to jail for ordering abortion pills online for her teenage daughter.

Punishment for ingesting the pills would become a new front in the abortion rights battle, an offense that some activists say may be difficult to prove in court.

"There's no real medical way to tell if someone orally ingested abortion medication or had a miscarriage," Kidvai said.

The gavel may seal the abortion ruling, but Cordona says her organization will keep its doors open.