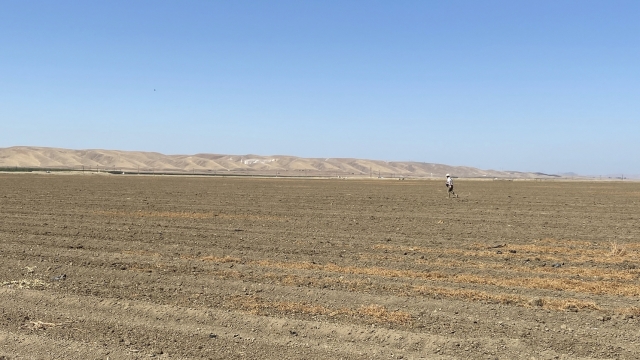 Farmers in California's San Joaquin Valley are struggling with the megadrought. It is the most productive agricultural region in the world, where farms grow 250 different crops on 17% of the nation's irrigated land.

"It is very serious in the San Joaquin Valley," said Professor Daniel Sumner, an agricultural economist at UC Davis.

Del Bosque owns and runs a 2,000-acre farm in the San Joaquin Valley. He grows almonds, melons and asparagus. Del Bosque grew up in the region working on farms with his parents.

The drought has forced him to change what he grows and how he operates his farm.

"We've always known that a lack of water is a potential hardship for our farm. But to get to the point where it completely stops the farm — we never thought that would happen," said Del Bosque.

California's water distribution is a complicated two-pillar system that ranks water rights seniority and public importance. The large canals running along farms in the Valley move water from northern parts of the state to the south. The water is already allotted, and very little of it is for the farms.

Most of the fruits and vegetables eaten in the United States are grown in the region. The farms produced 80% of the world's almonds. The water cutbacks are impacting the farms' output, and farmers say it will be reflected in the grocery stores.

"As our food supply shrinks, their food prices are going to increase," said Del Bosque.

Del Bosque gave up on his asparagus fields. He moved the water from the less valuable field crops to his more profitable melon fields. Even with that move, he had to leave 500 acres of fields empty instead of plant melons. His almond grove is suffering from the drought because he was forced to cut irrigation by a third.

"The size of the nut is important. Most people don't know this, but a larger almond fetches more money than a smaller almond,” said Del Bosque.

California almonds are big business. Four out of every five almonds eaten on the planet are grown in a 500-mile area of the San Joaquin Valley. The drought has cut this year's output by 10%. But, a surplus last year is keeping supply levels normal.

"It's a great worry for all of us as an industry and for the individual farmer," said Richard Waycott, president of the California Almond Board.

The California Almond Board spent decades researching water efficiency to help its members cut their irrigation needs by 33%. But, even with that knowledge, some almond farmers are still reducing their groves.

"The more profitable crops that do have global demand will probably be those that that will prevail. But certainly, the future of California agriculture is most likely a smaller footprint than we have today," said Waycott

Sumner, the agricultural economist, predicts farmers will sacrifice their field crops like hay to protect their cast crops like almonds, grapes and walnuts. Sumner says price increases have not arrived at the grocery stores yet, but are hurting farmers.

"Even though you don't see it at the supermarket, that doesn't mean it's not really serious for the farmers," said Sumner.

The long-term forecast predicts average precipitation and possible more drought for next year.