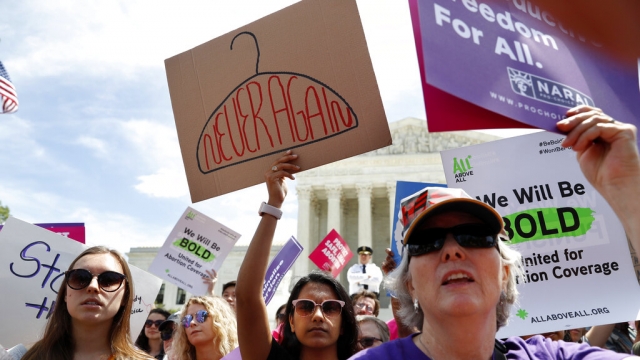 By Amber Strong
March 25, 2021
Progressives on Capitol Hill are one step closer to getting rid of the Hyde Amendment banning federal funding of most abortions.
SHOW TRANSCRIPT

Progressives on Capitol Hill are one step closer to getting rid of some federal abortion restrictions.

Democratic members of the House and Senate introduced the Each Act, Thursday, a bill aimed at permanently doing away with restrictions from the Hyde Amendment, a 1976  provision that keeps federal funds from providing abortions in most cases.

"One in four women who are low income seeking an abortion are forced to carry to term," Ravina Daphtary, the co-director of the Abortion Coverage Campaign for All Above All told Newsy.

The rule applies to most Medicaid recipients; the majority are minorities.

"Whatever you think about the procedure, we should all agree, what’s legal for a wealthy American should not be so inaccessible for Americans of color and low-income Americans," said Sen. Tammy Duckworth, one of the bill’s cosponsors.

Hyde is a "rider" — it doesn't have to be a part of appropriations bills but Congress has attached it for 40 years.

So, opponents could get rid of it by making sure it's not added to bills or they could pass legislation to make sure abortions are covered by government insurance no matter what.

Advocates got a temporary victory: the latest COVID relief package didn’t include Hyde provisions. They praise the move but want to see permanent action and guaranteed abortion coverage.

"That was just one piece of legislation and it really doesn't, won't have a huge impact on people who are, who are, you know, really seeking an abortion and struggling to make ends meet," argued Daphtary.

The president supports the efforts. But Congress could be an uphill task for progressives. Polling on the issue depends on the question at hand.

A 2021 Ipsos poll shows 58% who say health insurance should cover abortion whether it’s public or private. However, A 2021 Marist poll shows only 38% support tax-payer funded abortions.

"The Hyde Amendment is a sort of cornerstone common-sense pro-life protection, and we will be fighting to make sure it's included in the next appropriations bill," Noah Brandt, communications director for Americans United for Life, told Newsy.

While this will likely make it through the House, it would also need the support of all Democrats and at least 10 Republicans in the Senate. Amber Strong, Newsy.