Legal Challenges Over Abortion Rights Mount Across The U.S. 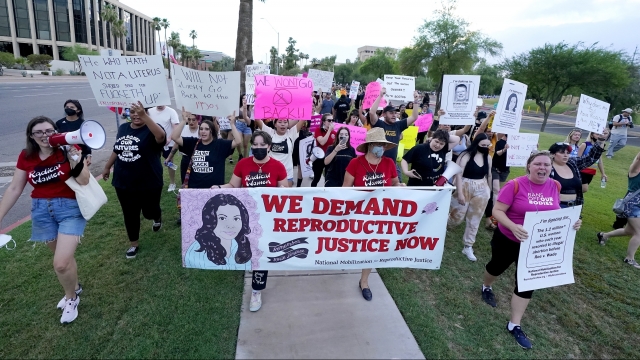 Nearly a week after the Supreme Court's decision to strike down Roe v. Wade, legal battles over abortion rights are mounting from coast to coast.

"Last week, I promised I'd fight this every way we can with every power that we have. And that's what we're gonna do. Today I'm announcing: We're taking this fight back to the courts," Wisconsin Gov. Tony Evers said.

Wisconsin is the most recent state to take legal action.

Attorney General Josh Kaul filed a lawsuit challenging the state's 173-year-old abortion ban, which bars the procedure in every instance, except to save the mother's life.

"It can't be both legal and illegal to provide an abortion to protect the health of the mother," he said.

A handful of other states suddenly find themselves under decades-old abortion bans, resurrected in light of the Supreme Court's ruling.

That includes Michigan, where Gov. Gretchen Whitmer is asking the state's Supreme Court to end "confusion" over abortion.

"I don't think many knew that Michigan would snap back 91 years to a law that would render this pro-choice state one of the most extreme in the country," Whitmer said.

As of now, in about 60% of U.S. states, abortion is banned, will soon be banned or is under serious threat. Two of those states are currently in legal limbo: Louisiana and Utah.

They were part of a group of 13 states with so-called trigger laws — abortion bans designed to take effect when Roe was overturned. But judges in both states have temporarily put those bans on hold, as they consider lawsuits challenging them.

In other trigger ban states, bans are well underway or will be enacted soon.

"This is a critical moment in our history," U.S. Department of Health and Human Services Secretary Xavier Becerra said. "How we respond will speak to how we view the rights, the dignity and the well-being of women everywhere."

He vowed his department will do everything it can to protect abortion access.

The reality is, there's not much the federal government can do at this point. But in states where abortion is legal, officials are sending a message of their own.

And a coalition of West Coast states including California, Oregon and Washington have committed to ensuring patients from across the nation can access abortion procedures in their states.