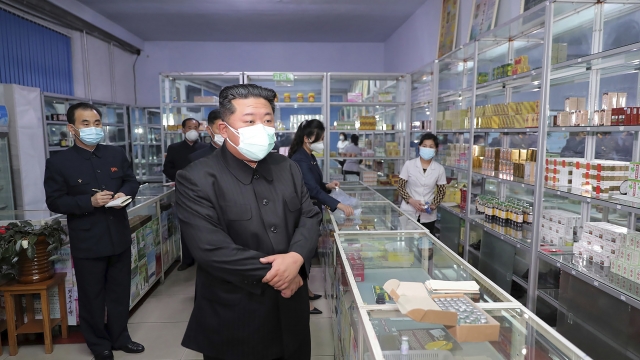 SMS
North Korean Leader Blasts Pandemic Response As COVID Outbreak Surges
By Associated Press
By Associated Press
May 16, 2022
According to state media, more than 500,000 people have been quarantined due to a fast spreading fever — but those numbers are likely underreported.

North Korean leader Kim Jong-un criticized officials over slow medicine deliveries and mobilized the military to respond to a surge in suspected COVID-19 infections, as his nation struggled to contain a fever that has reportedly killed dozens and sickened nearly a million others in a span of three days.

North Korean health authorities said Monday that eight more people died and an additional 392,920 were newly found to have feverish symptoms. That brings the death toll to 50 and illnesses to more than 1.2 million, respectively. It’s a sharp jump from six dead and 350,000 sick reported last Friday, a day after the North said that it found that an unspecified number of people in capital Pyongyang tested positive for the Omicron variant.

Kim has acknowledged that the fast-spreading fever, highly likely driven by COVID-19, is causing “great upheaval” in the country, and outside experts say the true scale of the outbreak is likely much bigger than what’s described in the state-controlled media.

Some suspect that North Korea has understated its fatalities or illnesses to shield Kim's leadership from criticism. The North likely lacks test kits and other tools to detect virus carriers with no or mild symptoms, which means that several million might already have been infected.

“When people die, North Korean authorities will say they’ve died of overwork or from natural deaths, not because of COVID-19,” said Nam Sung-wook, a professor at Korea University in South Korea. Nam said the North is likely understating the death toll to protect “the dignity of its supreme leader.”

While neighboring South Korea and China have offered to send medical supplies and other help, experts say it’s too late to inoculate the North’s 26 million people, and that the only realistic outside help would be offering limited supplies of vaccines to reduce deaths among high-risk groups, including the elderly and people with preexisting conditions.

It's also unclear whether and how soon Kim would accept outside offers of aid because he has previously rallied for unity at home to guard against the pandemic without resorting to foreign help.

State media didn’t specify how many of the fever cases were confirmed as COVID-19. Among the 50 fatalities, North Korea officially identified only one as a COVID-19 case so far.

Failing to slow the virus could have dire consequences for North Korea, considering its broken health care system and that its people are believed to be unvaccinated. There's also malnourishment and chronic poverty.