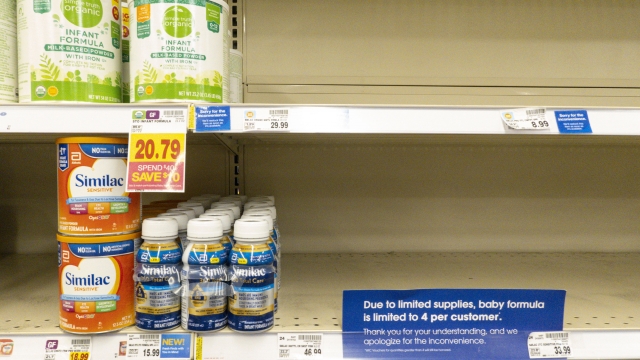 SMS
Lawmakers Look At Ways To Relieve Worsening Baby Formula Shortage
By Maura Sirianni
By Maura Sirianni
May 13, 2022
The baby formula shortage has left parents desperate to find food for their infants. Now the FDA is looking at ways to import it.
SHOW TRANSCRIPT

Jenna Cox is one of many moms struggling to find the formula her infant son needs. "It's like a rat race," Cox, a Tennessee mom, said. "It's like you have to rush to Target as soon as they open to see if there's anything on the shelves, and there's nothing."

In Wisconsin, Sam Wiegele launched a Facebook group called Baby Formula Exchange for moms to trade and alert one another.

President Joe Biden announced Thursday he will work with the CEOs of Target and Walmart as well as manufacturers to boost supplies.

The shortage is blamed in part on a massive formula recall back in February.

Abbott Nutrition was forced to shut down a Michigan manufacturing plant due to contamination concerns when four babies suffered bacterial infections after consuming the formula. Two of the infants died.

Officials say the affected Abbott plant could come back online within two weeks, but it could take up to 10 weeks for shelves to be restocked with the new product.

In the meantime, the FDA announced it would allow some formula products from the closed facility to be released on a "case-by-case" basis.

Formula is now 43% out of stock nationwide, up from 31% last month, according to retail tracking firm Datassembly.

One solution is to potentially import formula to get product on shelves quicker. Officials are looking at the possibility of loosening import restrictions, meaning there could soon be baby formula shipped from other countries like Chile, Ireland and the Netherlands.

The White House is facing growing scrutiny and pressure, and lawmakers are rushing to address the shortage.

On Friday, House Speaker Nancy Pelosi said Democrats are working to do more to address the shortage. She said next week the house will bring up a bill to grant emergency authority to the "Women's, Infants and Children's" program to address supply chain disruptions and recalls.