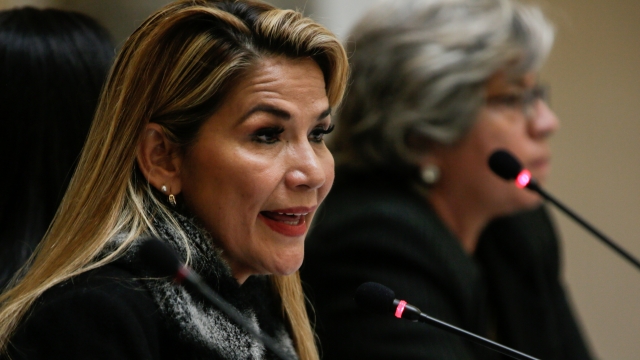 SMS
Lawmakers In Bolivia Approve New Elections
By Alec Larson
By Alec Larson
November 24, 2019
​Bolivia's Supreme Electoral Tribunal will be in charge of setting a date for the new elections.
SHOW TRANSCRIPT

The legislation, passed on Saturday, will annul the results of the contested Oct. 20 elections and forbid the reelection of any candidate that has served the last two terms consecutively as president, effectively ruling out former president Morales.

Interim President Jeanine Áñez tweeted after the vote that she would make the measure official and thanked lawmakers "for having understood and heard the demands of the Bolivian people."

Following irregularities in the country's last general election, former president Evo Morales resigned in early November amid a wave of protests. Morales has since called his ouster a military coup, and allegedly organized roadblocks to stop food from entering certain cities. Earlier this week, Bolivia's interim government accused Morales of terrorism and sedition over allegedly fomenting unrest in the country.

Bolivia's Supreme Electoral Tribunal will be in charge of setting a date for the new elections, but lawmakers will first have to select new members to the tribunal before that can take place.