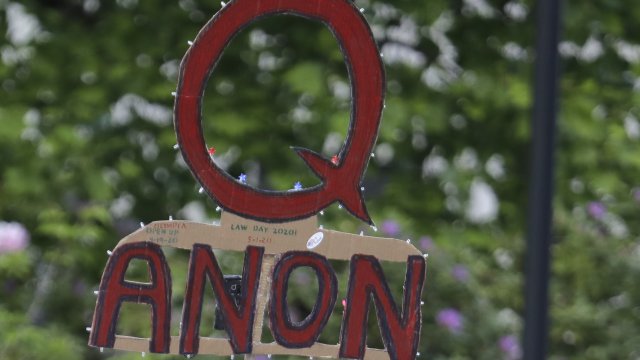 There’s no typical person who joins a cult.

Famed psychologist Phillip Zimbardo once wrote that a lot of members are well-educated, sensible, and logical.

Some cults are religious. Others are political, polygamist or apocalyptic, like Q-anon.

But sociologist Dr. Janja Lalich says no matter what they preach, cults share many of the same characteristics.

First, there’s an authoritarian leader who uses his or her influence to entice people into the group.

Once people are in, indoctrination begins. Members go through a “thought reform” process to change the way they think – no questions asked.

Lalich, who was once a member of the People’s Temple cult, put it this way.

"Psychological and emotional manipulations that are used to get you to conform, preying on your guilt and shame and love and fear and anxiety."

Once people “commit” to their new belief system – they’ll bend to what Lalich calls systems of influence and control.

Cult leaders will decide what you wear, how to talk and go as far as telling you who to have sex with.

Members are often forced to cut off friends, family and eventually lose their own free will.

While not all cults are religious, religion scholar Reza Aslan says most religions we know today started as cults.

The key differences today? He says cults exert more control and leave little room for disagreement. Members also worship a human being instead of gods as a higher power, like Charles Manson and the founder of “The People’s Temple” Jim Jones.

Historians say thousands of people joined Jones’ community as a way of coping with the uncertainty and turmoil of the 1970s.

Jones promised a utopia, free from racism and government oppression.

He convinced nearly one-thousand men, women and children to escape to the South American jungles of Guyana.... And built the “Jonestown” compound.

That same spot is where — years later — Jones convinced over 900 followers to drink "flavor-aid" punch, poisoned with cyanide.

If cults can be so controlling, harmful, even violent — why would anyone want to join?

Well, some psychologists say that no one tries to join a cult.

They’re all coerced by a set of psychological tactics – masked as the promise of a better life.

That’s how convicted sex trafficker Keith Raniere manipulated some 18,000 women into joining what they thought was a self-help group called NXIVM.

Dozens of women were pulled even deeper into a secret sex cult, featured in HBO’s documentary series "The Vow.”

how did Raniere do it?  Some psychiatric researchers point to vulnerability, idealism, and a desire for community.

One study found the people most who committed to cults were working on personal development, unhappy with life, or were on a spiritual quest.

And cult recruiters are acutely aware of who is susceptible to manipulation.

During Raniere’s trial former NXIVM recruiters said they promised women a solution to their biggest problem — but only if members obeyed their leader’s sadistic commands, like branding women with his initials and coercing them into sex.

New members may also be swayed by cult leaders who use a manipulation tactic that psychiatrists call “narcissistic seduction.”

the term — first coined in 1999 — refers to how leaders play with someone's vulnerability and emotions, to make someone dependent on them.

Psychologists say another recruitment technique is to show deep love and affection on potential member, showering them with attention until they convert.

Thats when the adoration stops.

In a small study of former cult members, 42 percent said they didn’t want to leave because of a romantic relationship with another member, or their leader.

Finally, some people join cults without even realizing it.

This could happen in a political group, a multi-level marketing business, or a wellness brand.