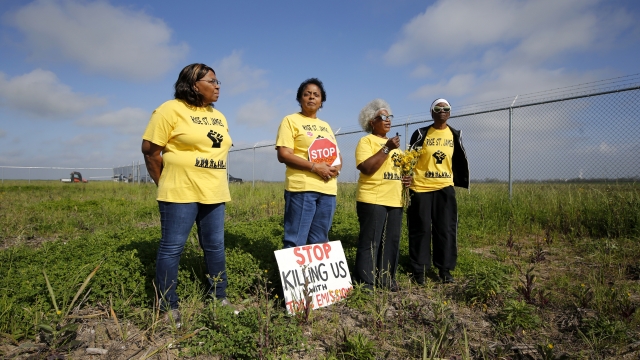 Clean air and access to clean water are obvious traits to better living conditions, but not everyone in the U.S. has the luxury of choosing to live in safer and healthier areas. In fact, many communities of color in particular are forced to deal with these kinds of environmental hazards, leading to negative health outcomes. The term for this is environmental racism.

For instance, a recent ProPublica analysis tracked hazardous air pollution across the country between 2014 and 2018 and found that in predominantly Black areas, the estimated cancer risk from toxic air pollution is more than double that of majority White areas.

While some states had some policies in place to protect against this, many of them became outdated years ago.

Pennsylvania's Department of Environmental Protection established an environmental justice policy in 2004, and they went almost two decades without updating it. Now it’s being re-written to ensure a more equitable environment for minority and low-income neighborhoods.

Outdated plans are pretty common across the country, but recently, Pennsylvania decided to make some changes to make sure the policy meets the needs of its residents today.

Pennsylvania Gov. Tom Wolf signed an executive order in the fall of 2021 saying that the state must uphold the Environmental Rights Amendment. That says people have the right to clean air and water and that all Pennsylvanians are entitled to fair and equitable treatment and meaningful involvement in decision-making that affects their environment.

The executive order also made sure this is a group effort, with all state agencies working together through an Environmental Justice Interagency Council to look at ways they can all help, beyond the Department of Environmental Protection.

The department says it's been engaging in public participation; it's crucial to make sure the people impacted are a part of these discussions. The policy improvements aim to tackle some of the biggest issues these low-income minority communities face.

Now, it's starting to take shape. This year, the Santa Ana City Council in Southern California voted to make updates to its nearly 40-year-old plan to address lead contamination and other land issues impacting low-income communities of color.

Patricia Flores Yrarrázaval is a Santa Ana resident who leads Orange County Environmental Justice. The group partnered with another local grassroots movement and through a study, found that the highest levels of lead contamination were in migrant communities.

They said it took mobilizing with other community members to get these changes approved, but that was all possible with the new law. Now the city has committed to working on the issue.

"We have blood lead testing for residents as well as an assurance from the health care agency that all residents, regardless of immigration status, will be given access to health care for anything related to this side impact crisis," Flores Yrarrázaval said. "So, they've agreed to jobs being prioritized for our residents and to working with us in particular, also to remediate across the city."

Flores Yrarrázaval says if other states adopt a similar law, they could make it a little more specific.

"While I think that SB1000 was helpful in providing the context of like, you know, you have a legal requirement to include an environmental justice component — there wasn't a lot of specific and binding language within the law already, and so, we really had to push for that from our perspective," Flores Yrarrázaval said.

Pennsylvania and California aren't alone in their efforts. In recent years, other states have introduced bills around environmental justice, created task forces and made updates to existing policies.

However, the only way to truly measure these effects long-term is to look at how these plans are enforced and data on health outcomes for minority communities down the road.