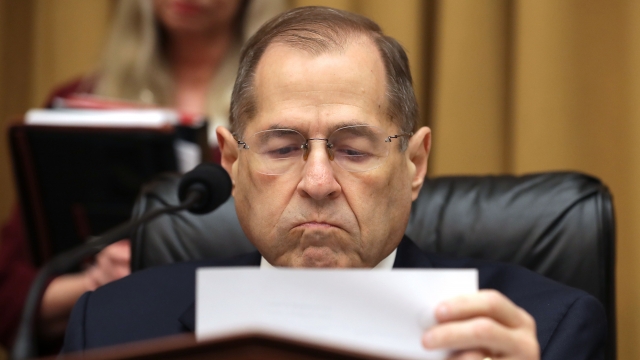 SMS
House Democrats Set Deadline For Trump To Offer Impeachment Defense
By Alec Larson
By Alec Larson
November 30, 2019
The House Judiciary Committee set a Dec. 6 deadline for the President to decide if his counsel will participate in the upcoming impeachment hearings.
SHOW TRANSCRIPT

The House Judiciary Committee has set a deadline of December 6 for President Donald Trump and his lawyers to decide if they will participate in the committee's impeachment proceedings against him.

House Judiciary Chairman Jerry Nadler sent a letter to President Trump on Friday with the new deadline, asking if the president's counsel intends to make a presentation or request witnesses as part of the proceedings.

Under House-passed rules, the president's counsel will be allowed to take part in the Judiciary Committee hearings, unlike the House Intelligence Committee's public hearings earlier this month.

The rules state that President Trump and his counsel will be invited to attend committee presentations of their evidence, as well as raise objections, request witnesses or further evidence, and give a concluding presentation. The rules also include a clause that allows Nadler to block witnesses for the president if the White House obstructs the investigation.

Despite saying earlier this month that he would "strongly consider" testifying in the impeachment probe, CNN reports that President Trump and his team are currently weighing whether or not it would be worth it to take part in the proceedings.