Jill Biden Arrives In Europe, Will Meet With Ukrainian Refugees 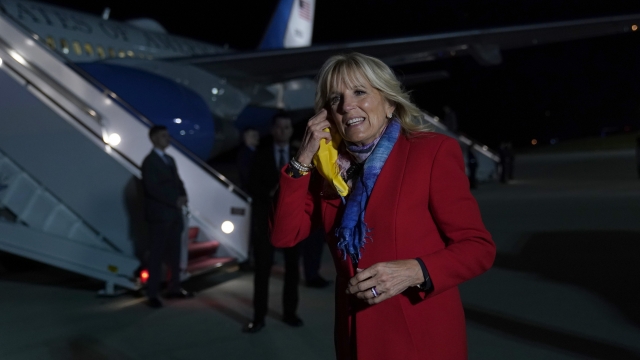 For weeks, first lady Jill Biden has been transfixed by the news coming out of Ukraine, by the bombings and scenes of “parents weeping over their children’s broken bodies in the streets,” as she said in a recent speech.

Now Biden is using her second solo overseas trip to get an up-close look at the Ukrainian refugee crisis by visiting Romania and Slovakia, where she will spend Mother's Day meeting with displaced families in a small Slovakian village on the border with Ukraine. 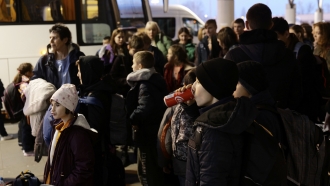 After flying overnight from Washington, Biden arrived at Mihail Kogalniceanu Air Base in Romania, near the Black Sea, in time to help serve Friday dinner to U.S. service members stationed there. Some of the several thousand U.S. troops who President Joe Biden deployed to eastern Europe in the leadup to the war were sent to the base, which is about 60 miles from Romania’s border with Ukraine.

Jill Biden told reporters traveling with her Thursday night, “It’s so important to the president and to me that the Ukrainian people know that we stand with them.” She said earlier in the week she wants the refugees to know “their resilience inspires me.”

NATO allies Romania and Slovakia border Ukraine and have taken in some of the millions of mostly women and children who fled after Russia invaded Ukraine in late February, triggering Europe's largest refugee crisis since World War II.

Biden also will use her four days in Europe to highlight issues she promotes at home, such as support for U.S. service members, education and the welfare of children.

The centerpiece of the first lady's trip comes Sunday — Mother's Day — when the mother of three meets with displaced Ukrainians who sought refuge across the border in Slovakia.

"I can only imagine the grief families are feeling,” Jill Biden said this week. “I know that we might not share a language, but I hope that I can convey, in ways so much greater than words, that their resilience inspires me, that they are not forgotten, and that all Americans stand with them still.”