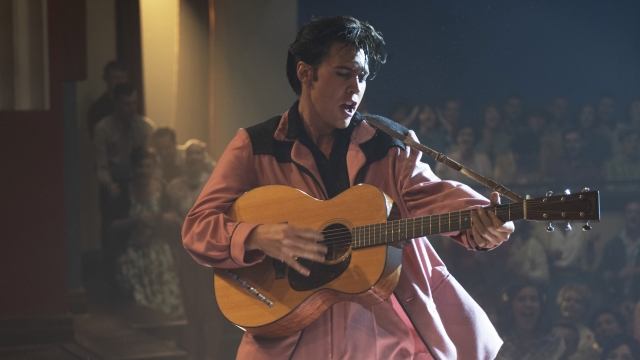 SMS
Elvis Presley's Complicated History With Black Musicians
By Casey Mendoza
By Casey Mendoza
June 28, 2022
Elvis was famously inspired by Black musicians of his era, but some say he only copied and profiteered off Black artists without credit.

“Hound Dog” was one of Elvis Presley’s earliest singles, landing the number one spot of the Billboard charts and skyrocketing the career of the young musician in 1956.  It’s an obvious part of Presley’s origin story in the singer’s latest jukebox musical biopic, but it’s also a lightning rod for one of the biggest criticisms of the musician’s legacy.   Before Presley put a bop spin on “Hound Dog,” the song was originally recorded by rhythm and blues legend Big Mama Thornton. The song was specifically written for her, and it sold almost two million copies in 1953.  It was a success in the R&B world, but Thornton could never reach Presley’s level of mainstream fame. Because like many Black musicians during segregation, she was never able to reach White audiences.  It's because of that disparity that some critics accused Presley of profiteering off the works of Black artists. In 1994, singer and jazz pianist Ray Charles even criticized him as someone who copied Black styles for White audiences.  Others artists were more supportive of Presley, who grew up in a predominantly Black neighborhood in Tupelo, Mississippi.  James Brown said “I wasn’t just a fan, I was his brother,” Little Richard said Presley opened the door for him and B.B. King argued that the rock and roll legend didn’t steal music but re-interpreted the music he grew up on.

After being dubbed “The King of Rock and Roll,” it was Presley who credited Black artists like Fats Domino and said the genre “was here a long time before I came long.” The newest “Elvis” biopic from director Baz Luhrmann contextualizes Presley’s origins in the segregated music industry — something past films about the musician largely ignored.Actor Austin Butler, who played Presley, said: “We don’t have Elvis without Black music and Black culture.”The beginning of the film highlights the musician’s relationship with B.B. King, his love of gospel church music and Beale Street clubs in Memphis and his origins at Sun Studios, which championed Black blues artists.One of the best musical performances in the movie is by Shonka Dukureh, who sings “Hound Dog” on a Memphis stage as the legendary Big Mama Thornton. The song plays through different montages of Presley’s musical beginnings but fades out as soon as his career picks up. “Elvis” made $31 MILLION in its opening weekend and is expected to begin streaming on HBO Max in August.

What The Warner Bros.-Discovery Merger Means For Streaming As A Whole

Woman Describes Frequent Sex With R. Kelly Before She Was 18

Rapper A$AP Rocky Charged With Felony Assault With A Firearm

Celebrities: The Climate Consequences Of Their Private Jet Use