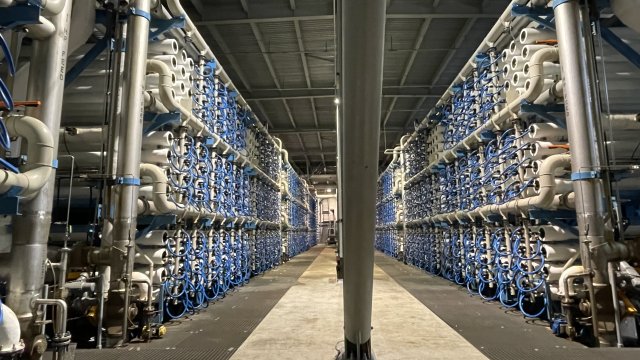 SMS
Drought Revives Debate Over Desalination
By Scott Withers
By Scott Withers
October 15, 2021
Many water reservoirs across the West have emptied out due to years of low precipitation and increased water usage.
SHOW TRANSCRIPT

The megadrought gripping the Western United States has renewed a debate about desalination. Many water reservoirs across the West have emptied out due to years of low precipitation and increased water usage. Water officials, business owners and residents impacted by the drought are questioning why there are not more desalination plants converting Pacific Ocean water into drinkable water.

"Here we are in this current drought. San Diego County is the only county that is actually not in the red compared to other counties in California," said Sachin Chawla, president of Poseidon Resources, a water treatment and reclamation company.

Desalination is not a new technology. It's been embraced by Middle Eastern countries to provide the majority of their water supplies. But, in the United States, it has not been widely adopted because of the price to build a plant and the environmental impacts from the process.

The plant draws in the water from a lagoon. Most of the water is set aside to offset environmental impacts from the brine created by the desalination process.

"The first step in water treatment is to filtrate, you know, to take out the big solid particles," said Chawla.

The water is processed through a series of filters, and ultimately all salts are stripped out by special membranes. The water is so clean, some minerals have to be added back in before humans can drink it.

Critics say the process creates a high-salinity brine that damages the ocean when it is pumped back out from the plant. The Carlsbad plant uses 200 million gallons of water to dilute the brine so it matches the salinity of the ocean water before it's pumped back out.

The other major concern is the price of building the desalination plant.

"The technology has improved over the years. So the cost of desal was three times more three decades ago,” said Chawla.

Currently, there are 12 desalination plants of different sizes running in California. The company running the Carlsbad plant has worked for two decades to build a similar sized plant in Orange County. Regulatory and permitting issues have delayed the process. The plant could receive final approval by the end of 2021.

"Desalination is definitely a tool. It's an important tool. Is it the pathway that solves all of our problems? I don't think it is," said Erik Ekdahl, deputy director of the California Division of Water Rights.

UC Davis professor Samuel Sandoval says desalination is too expensive. Sandoval is a water accountant specializing in the tracking and pricing of water. He knows how much water each type of plant needs to grow and how much that water costs.

"A tomato, two and a half foot. The same for lettuce. A strawberry about the same. And olive trees three foot. Almonds four foot. Multiply four feet of water times $1,200 (and you have) $5,000 on water. It is not profitable," said Sandoval.

San Joaquin Valley farmers support building new desalination plants on the coast for residents there to use and pay for.

Chawla says the average household in San Diego pays $5 per month extra for drought-resilient water produced at the Carlsbad plant.

The cost of the plant is diluted over time as more desalinated water is produced each day. But California water officials say the upfront cost is hard to swallow.

"It's hundreds of billions of dollars to kind of put desal plants all up and down the coast," said Ekdahl.

The California Department of Water Resources has warned cities they may not receive any water next year from the state's reservoirs due to the ongoing megadrought.