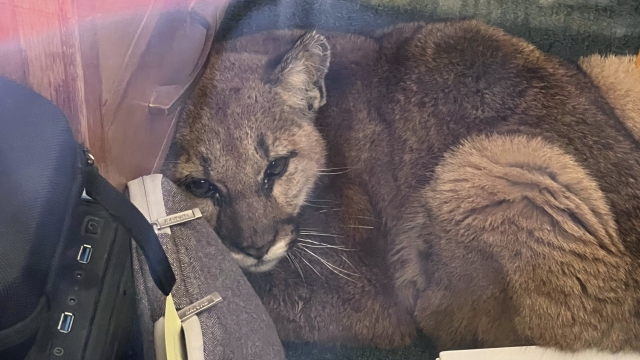 The custodian was opening Pescadero High for the school day when the juvenile mountain lion was spotted, said Detective Javier Acosta with the San Mateo County Sheriff’s Office. No students or teachers were on campus at the time, Acosta said.

“The mountain lion casually walked through campus and decided to go into an English classroom,” he said. “The custodian acted quickly and managed to shut the door behind it.”

Acosta said the animal, estimated to be about 40 pounds, appeared “lost and scared."

Update on the mountain lion: The mountain Lion has been safely removed from Pescadero High School by @CaliforniaDFW It is believed to be a male approximately 4-6 months old. It will be transported to Oakland Zoo for a health assessment pic.twitter.com/A3SDpUpXhD

The California Department of Fish and Wildlife tranquilized the cat and sent it to the Oakland Zoo for examination.

The underweight male was estimated to be 4 to 6 months old and had a fractured tooth that will need to be extracted before the cat can be released back into the wild, KTVU-TV reported.

Pescadero is a small coastal community about 35 miles south of San Francisco.