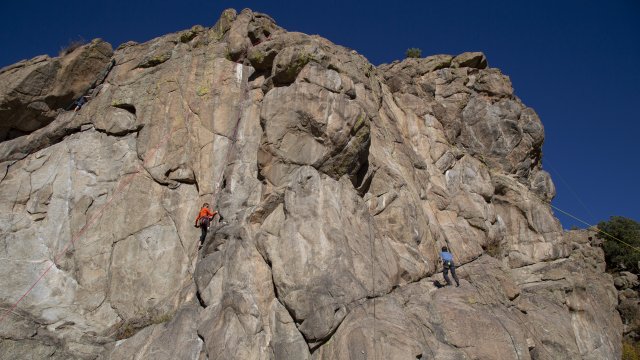 SMS
The Rocky Future Of Climbing Due To Climate Change
By Meg Hilling
By Meg Hilling
November 30, 2021
Climbers and scientists say climate change is altering routes, creating obstacles and changing the sport of climbing forever.

For professional alpinist Kitty Calhoun, staggering heights aren't the only thing she has come face-to-face with when climbing.

"There was a moment in my life when I realized that climate change was real, and it was having an impact on my life," Calhoun said.

From peaks in South America to summits in the Himalayas, Calhoun says she has seen climate change's effects — first becoming clear to her during an expedition to climb a thin-ice line in Kenya in 2005.

"It was a rare ascent of the Diamond Couloir on Mount Kenya, and it hadn't been climbed in nine years," Calhoun said. "We heard rumor that it might be in so we brought ice climbing gear, because we had figured, 'Well, we're just going to have to go rock climbing, there's no ice left.' We got there and there was ice at the top, and we were able to do some mix climbing up through the bottom part and do the route, but I realized that these routes that were once considered classics are disappearing. They may never come in again."

The climb led Calhoun to reflect on previous ascents she had made and brought her to an alarming realization.

"As a climber, as an alpinist, you're coveting first ascents," Calhoun said. "Now I realize that a lot of us may be experiencing last ascents, so, it hit home to me personally then. The pace of change has picked up, and it's alarming to me because I thought I would never see change in my lifetime."

As the temperature of the planet rises and some historic climbing routes disappear, climbers like Phil Henderson are shocked at what they are seeing.

"There are places on mountains that have never seen bare ground, but they do now," Henderson said.

He says the stability of rock formations, especially at high altitudes, are increasingly being called into question, forcing many to reevaluate their approach.

"Rockfall is more prominent now, you know, because things aren't as solid and frozen in places they used to be, where there was always permanent ice," Henderson said. "So yeah, that makes a huge difference in where you go and the time of the year even."

Tumbling rock isn't the only debris climbers are having to watch out for. Scientists like Dr. McKenzie Skiles say the shortening winter seasons and drastic temperature changes are giving way to dangerous ice falls.

"You could start ice climbing in December before; now it's really January and February," Dr. Skiles said. "So, when you get these wide temperature swings during ice climbing season, you can actually end up with ice fall and it makes it more dangerous."

Dr. Skiles is an assistant professor in the geography department at the University of Utah. In addition to running the university's snow hydro lab, she also studies alpine climate, which looks at how mountains are changing in the face of climate change.

"I grew up in Alaska, watching landscapes around me change, and I wanted to understand what was the cause of that and what we can do about it."

An avid skier and climber herself, Dr. Skiles says part of what makes the impact of climate change on climbing so concerning is how visible it has become.

"Climbing is an interesting one, because rocks themselves change so slowly over these really long geologic time periods," Dr. Skiles said. "Similar to climate, we should never be able to notice those changes, but now that climate is changing so fast that we can notice. It's not necessarily impacting the way that the rock is changing, but it's impacting the way that we interact with the rock."

And it's not just routes at the top of the world that are being impacted by climate change — it's also local crags in some people's own backyard.

"Another access issue that relates to climate change is the way that the forest fires are burning," Dr. Skiles said. "They're so widespread, and they're so intense and they're getting more so every year that that is limiting access to a lot of climbing areas."

According to a 2019 survey conducted by the American Alpine Club, 94% of climbers believe climate change poses a risk to the places they "climb, ski and mountaineer," and 88% believe it's happening now and "is mostly caused by human activities."

"The world is changing so quick you feel like you can't keep up," Dr. Skiles said. "This is not something that I can ignore, or hopefully anyone else can ignore either."

That's what Mario Molina is trying to prevent from happening.

"There's not a segment of society that is not going to be impacted one way or another," Molina said.

Molina is the executive director of Protect Our Winters, a nonprofit that works with athletes, scientists, creatives and communities to advocate for legislation that addresses climate change.

"It is only through the active engagement of groups of people who feel passionate about a particular issue that we have ever corrected this ship of history in the direction of better environmental care, better human care and justice in general," Molina said.

Founded by professional snowboarder Jeremy Jones in 2007, the Protect Our Winters network has grown to include people from all areas of the outdoor industry, including climbers.

"If you play a sport outside, it's going to be impacted ... in one way or another," Molina said.

He says that's why athletes are positioned so well to speak out on the impact of climate change.

"I think athletes have not only the right but also a responsibility to speak out on their values and on their beliefs," Molina said. "Climate change for them, it's something so personal, because they're seeing it in the mountains every year, every season that they go out."

But Molina says speaking out on climate change doesn't mean these athletes have to have all the answers.

"If you believe in it and you're committed to making change, then it's your obligation to speak up," Henderson said.

"What I'm seeing in the mountains actually has a real personal impact on billions of people," Calhoun said. "We have a voice, and I've heard that either you have good action, bad action or inaction. Inaction is almost the same as bad action."