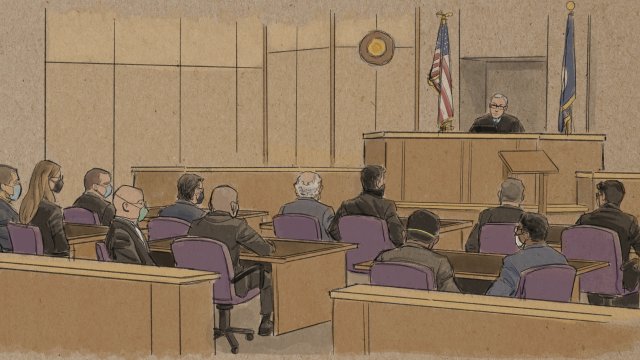 By Jamal Andress
March 4, 2021
According to polls, 65% of likely U.S. voters believe George Floyd was "murdered" and 74% see his death as a sign of underlying racial injustice.
SHOW TRANSCRIPT

The 6th Amendment guarantees everyone the right to a fair trial with an impartial jury. But for a case that pushed some 20 million people into the streets to protest last summer, what does an impartial jury look like? And is it even possible?

The video of Chauvin kneeling on Floyd's neck for nearly nine minutes sparked international outrage and with it, pronouncements of guilt from Minneapolis' mayor and chief of police, Minnesota's governor and the now-President of the United States.

Mark O'Mara is one of few attorneys who can identify with what the Chauvin defense team is up against. O'Mara represented George Zimmerman, who fatally shot Trayvon Martin. Martin's death and Zimmerman's acquittal helped launch the Black Lives Matter movement.

O'Mara said, "President Obama actually spoke about the George Zimmerman case twice before the trial, and I lashed out at him. President Obama should have left that to the jury, only because his words carry so much weight. And in the same sense, the governor, the mayor, the police commissioner, all of those people's words carry weight. And that weight, you have to presume is going to rest on the shoulders of a juror."

Prospective jurors answer a questionnaire before jury selection begins that asks about media habits, prior knowledge of the case and personal background.

But for high-profile cases like this one, O'Mara says you have to go a step further than what's written down — like doing social media background checks on jurors.

"If you're not doing good, intense social media investigation on the jurors, it's malpractice. I hire two, three, four student law student interns. It's not hard to know how to look into baseline social media inquiries," he said.

With a case that has garnered this much coverage, O'Mara says the goal shouldn't be to find a juror who's clueless about the facts of the trial, but rather to weed out jurors who show a special bias one way or the other.

No matter who ends up in the jury pool, the defense has an uphill battle on public opinion. According to two 2020 polls, 65% of likely U.S. voters believe George Floyd was 'murdered,' and 74% of Americans see his death as a "sign of an underlying racial injustice problem."

Many Americans viewed Zimmerman's acquittal as proof that Black lives didn't matter like they should. Similarly, George Floyd's death has become a symbol of racial injustice in policing.

O'Mara says that association may be the hardest thing for the defense to overcome when this trial finally gets underway.

"That was our greatest fear: that the jury would say, well one of the jurors would say, 'I am not going to walk out of this courthouse, through that crowd, back to my nice quiet neighborhood somewhere, and be the one that acquitted that White guy of killing that little Black kid.'"