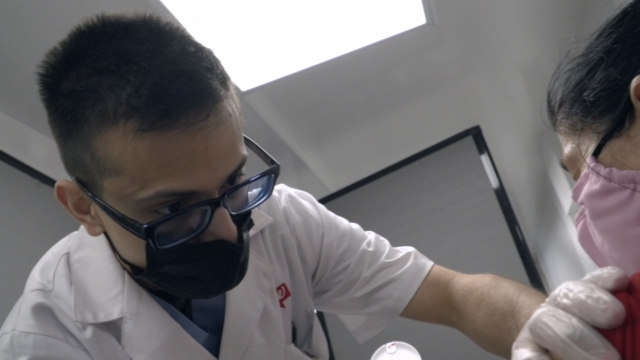 Keeping up with the CDC's recommendations for COVID vaccines and boosters has caused some confusion for people, including health care providers.

Although fourth doses are not currently recommended for the vast majority of Americans, the CDC has urged millions of people with compromised immune systems to get them.

According to a newly published story by Kaiser Health News, some pharmacies are turning those immunocompromised patients away.Kaiser Health News senior correspondent Liz Szabo talked to Newsy and explained the situation.

"Immunocompromised patients were told in August that they could get a third primary vaccination, so that's with the MRNA vaccine. So if you had a Moderna or Pfizer shot, you've probably been told to get two shots," Szabo said. "Someone who is immune compromised may not make enough antibodies after only two shots, so they've been told to get three shots. Now, five months later, they're eligible for a booster. So someone who has been vaccinated with an MRNA vaccine could potentially be getting their fourth shot right now."

But some immunocompromised patients have been turned away by pharmacies or haven't been told by their doctor that they're eligible for a fourth shot. So where is the disconnect?"

The CDC updated its guidelines to allow for booster for immunocompromised people — these are people at very, very high risk — back in October, but it did so pretty quietly, just by updating its website. There wasn't too much media coverage, it didn't send out a big press announcement," Szabo said. "In January, the CDC said that you can get a booster after just five months instead of six. So, in terms of the timing, that means that people can now get a fourth shot. This means if they were vaccinated earlier in August and they are immunocompromised, and I think a lot of those pharmacists just haven't kept up with recommendations."

But after Kaiser Health News shed light on the problem, the CDC reached out to clarify its guidance."After our story was published this week, the CDC held a conference call with pharmacists all over the country on Tuesday just to reiterate the guidelines and go through examples of who would qualify for a shot and who wouldn't," Szabo said.

What To Know About The Spread Of Monkeypox