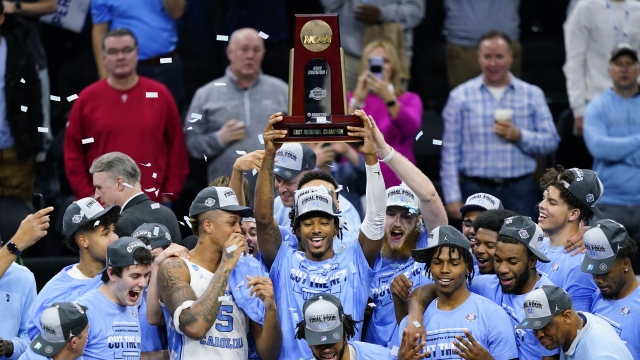 The Final Four is down to four blue blood programs: Kansas, the Blue Devils, North Carolina and Villanova.

America’s favorite underdog, Saint Peter’s, shouldn’t feel all that bad. North Carolina has crushed lots of dreams over the decades.

The Tar Heels ended all hope of a March Madness miracle in the early going Sunday, getting 20 points and 22 rebounds from Armando Bacot in a wire-to-wire 69-49 runaway over 15th-seeded Saint Peter's.

No. 8 seed Carolina (28-9) made its record 21st Final Four, and this one will be a scene like no other. Next Saturday in New Orleans, it's North Carolina vs. rival Duke and its soon-to-be-retiring coach, Mike Krzyzewski. Three short weeks ago, the Tar Heels fractured a different sort of fairy tale — Coach K's final home game — in a 94-81 beatdown of the Blue Devils at Cameron Indoor Stadium.

“I don't think anything can be as crazy as the leadup to that game over in Cameron,” coach Hubert Davis said. “We just keep our eyes straight ahead and we ignore all the noise.”

While Coach K’s winding road to retirement has been a beauty to watch this March, nothing has captured more imaginations during this NCAA Tournament than the run put on by Saint Peter’s.

The entire basketball budget for this scrappy group from Jersey City, New Jersey, is $1.6 million — or around $400,000 less than what Davis makes in a year. The first-year coach was sobbing as his players enveloped him after the buzzer.

“It was something that I just desperately wanted for them,” Davis said. “This is probably the most nervous I was before a game, because I just really wanted them to go to the Final Four.”

Two nights earlier, the Peacocks (21-12) looked like Final Four material. They beat Purdue to become the first 15 seed to advance to an Elite Eight.

Their hopes ended quickly in this one. They are hardly the first team to see grand plans undone by one of the country’s top-line power programs.

“I didn't really recognize my team for the first 10 minutes of the game,” Peacocks coach Shaheen Holloway said.

After Carolina's Leaky Black missed a free throw 2 1/2 minutes in, Bacot edged in for the offensive rebound and an easy putback. It gave Carolina a 7-0 lead. In its three tournament wins over Kentucky, Murray State and Purdue, Saint Peter’s hadn't trailed by more than six.

The Peacocks, whose 10-game win streak ended, moved the ball well and did get some looks over the first 10 minutes. Some shots went halfway down and rimmed out. Others rattled around the iron but wouldn’t fall. They trailed 21-7 after missing their first six shots, and 16 of their first 19.

Late in the first half, Daryl Banks III swooped in for what looked like a windmill jam. It got rejected — by the front of the rim. It made the Peacocks 5 for 27 on the night, and when Bacot dunked on the next possession, North Carolina led 36-15.

The weekend before, North Carolina had taken a 25-point lead against Baylor only to see it all melt away before pulling the game out in overtime. The turning point there came when Brady Manek got ejected for throwing an inadvertent elbow. No such drama this time, though Manek finished this game on the sideline, too — watching garbage time from the bench after scoring 19 points.

It was an emotional evening for Davis, who replaced Roy Williams, the coach who took the Tar Heels to five Final Fours over 18 years and was cheering from the stands for this one. Now the 51-year-old Davis joins the likes of Ray Meyer, Steve Fisher, Denny Crum and another Tar Heel, Bill Guthridge, as coaches who have reached the sport’s biggest stage in their rookie year.

“It's hard to believe or understand, but it really isn't about me at all,” Davis said. “I've been to the Final Four as a coach. I played at Carolina. I played in the NBA. It's not my time, it's their time.”

Were it not for Saint Peter’s, maybe North Carolina would be the underdog story of this tournament. Way back when, in 1985, another 8 seed shocked the world. It was Rollie Massimino’s 1985 Villanova team.

Then again, these are the Tar Heels. They’ve been playing as well as anyone for more than a month.

When they won at Duke on March 5, it threw a wet towel over what was supposed to be a celebration of Coach K’s final home game. On Sunday, they wrecked another of those so-called “perfect” story lines.

But this is more than a consolation prize for college hoops: Next, UNC and Duke meet for the 258th time — and never with the stakes so high.

“It’s a good question, but I can’t answer it right now,” Bacot said when asked to put the upcoming game in perspective. “Coach will get mad at me."

Bacot was named the region's Most Outstanding Player. His 22 rebounds matched a career high, and also a Carolina tournament record held by Tyler Zeller against Ohio in 2012. Over the two games, Bacot had 34 points and 37 rebounds.

Davis joins Dick Harp of Kansas as the only people to play for their alma mater, then lead them to the Final Four in their first year as a head coach. Harp also served on Dean Smith's staff when Davis and the Tar Heels made the Final Four in 1991.