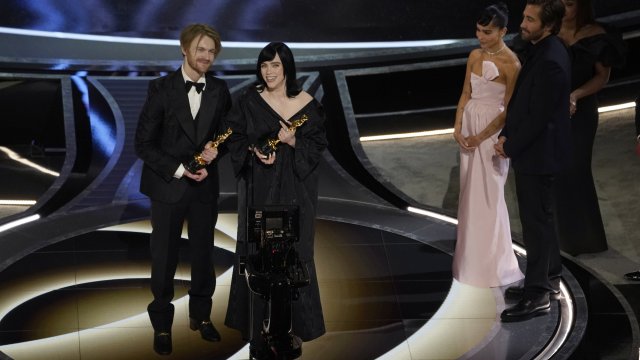 With the Grammys in the books, it's finally the end of what has been a very messy awards season, to say the least.

This year, the Golden Globes weren't televised at all because of reports of racism, sexism and bribery within the Hollywood Foreign Press Association. The Grammy Awards garnered their smallest audience ever, and the Oscars ... well, you know. It wasn't exactly the kind of attention the Academy necessarily wanted.

You might’ve tuned in to watch live, or you might’ve just seen it all pop off on social media. Most of you are probably in that second group — because live televised award shows have been losing viewers for years.

To understand what's pushing awards shows to the brink of irrelevance, we're gonna take you through another deep dive in "Pop Quiz."

The answers to this question will take us through some new, controversial additions to award shows, heated arguments about who deserves to be nominated and lastly, how streaming and social media have completely disrupted the way we watch TV.

Let’s start by looking at the numbers.

That started to drop dramatically in the past decade, with each of the shows in 2021 getting a fraction of the viewers they once had.

These drops in viewership have led to many decisions to revamp award shows to garner more viewers and boost ratings. The Academy Awards is probably the most notorious for its controversial changes.

Show producers are trying to make the show more entertaining, like with scripted gags and moments that seem made for social media, but for long-time award show watchers, it can get a little frustrating.

“In the past... the opening number was always, like, really flashy, but now it's just like, constant bits, and constant, like, trying to I think hit those viral moments," said film critic Jordy Sirkin.

"It always feels like the Oscars are chasing an audience that they're not going to get,"  said Charlie Bright, contributor at Gold Derby. "All this stuff that they're trying to do, it takes away from what I think are the most wonderful moments of the Oscars, which are these acceptance speeches."

And it doesn’t stop there. The Oscars also tried this year to award “Fan Favorite” films chosen by people on Twitter.

It didn’t go so well. It was another thing that people made fun of this year because these weren’t serious answers, and they took time away from actual winners. But the decision was made, because for years, critics have blamed lower viewership on the idea that nominees aren’t well-known or “popular.”

In 2017, a survey found that only 5% of respondents actually watched “The Handmaid's Tale,” which won that year’s Emmy for best drama.

And this year, the combined global box office gross of all 10 of the Oscar’s best picture nominees was just $642.9 million. To put that number in perspective, that’s less than what each of the top six movies of 2021 made individually. “Spider-Man: No Way Home” — the top grossing movie of the year — made over $1.8 billion worldwide.

While there are a few massive box office hits in “Titanic,” “Forrest Gump” and “Lord of the Rings: The Return of the King,” the Oscar’s best picture winners since 1980 averaged $291.8 million at the global box office. That’s pretty low, and it shows that, for the most part, Oscar winners have never really been chosen based on their popularity with mainstream audiences.

“They do introduce you to those kinds of more low-budget films and more independent films, things like that that don’t get the same marketing," Sirkin said.

“Parasite” went back to the theaters after it won best picture in 2020, and it made $8.8 million more at the box office in North America. Other winners, like "Moonlight," seem to have put some actors on the map for viewers.

All of this shows award shows still have a purpose as well as a dedicated audience that genuinely wants to tune in, so the larger issue of the loss of general audiences may be more tied to something bigger in the TV world: major shifts in viewership behaviors.

Beyond award shows, viewership for primetime shows on major networks have shrunken by 30 to 70% depending on the day and timeslot. In sports, this year’s Winter Olympics ended with the smallest audience ever, and when it comes to live news, a Pew Research study from last year found that 70% of U.S. Twitter news consumers use the platform to follow live news events.

The Grammy Awards is a great example of that — as #GRAMMYs was the number one Twitter trend in the U.S. for 15 straight hours, garnering more than 43 million tweets. It shows that fans were watching, just not in a way that translated directly to views or ratings.

“There are millions of people on social media, so obviously, you need to filter, you need to sort through what actually is a genuine piece of feedback and what is just all the white noise," Abraham said. "But I do think that the internal teams, whoever are making these decisions, should probably connect more... to what it is that the people are wanting and needing to see."

Something similar happened last year, when a live backstage video from the K-pop group BTS got more views on social media than the actual televised Grammy Awards ceremony.

All of this is heavily impacted by the rise of streaming and social media, which allows audiences to watch award shows, primetime programs and sports highlights on their own time. So, as much as award shows can try to change their program to cater to new audiences, they have to first figure out how to actually reach them.

Rapper A$AP Rocky Charged With Felony Assault With A Firearm

Celebrities: The Climate Consequences Of Their Private Jet Use