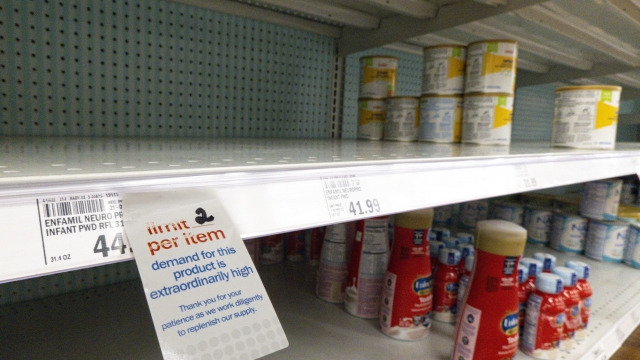 SMS
President Biden Invokes Defense Production Act For Formula Shortage
By Associated Press
By Associated Press
May 19, 2022
The move comes amid a nationwide shortage of infant formula after the nation's largest production plant was closed down due to contamination issues.

President Joe Biden invoked the Defense Production Act to speed production of infant formula and authorized flights to import supply from overseas, as he faces mounting political pressure over a domestic shortage caused by the safety-related closure of the country's largest formula manufacturing plant.

The Defense Production Act order requires suppliers of formula manufacturers to fulfill orders from those companies before other customers, in an effort to eliminate production bottlenecks. President Biden is also authorizing the Defense Department to use commercial aircraft to fly formula supplies that meet federal standards from overseas to the U.S., in what the White House is calling “Operation Fly Formula.”

Supplies of baby formula across the country have been severely curtailed in recent weeks after a February recall by Abbott Nutrition exacerbated ongoing supply chain disruptions among formula makers, leaving fewer options on store shelves and increasingly anxious parents struggling to find nutrition for their children.

The announcement comes two days after the Food and Drug Administration said it was streamlining its review process to make it easier for foreign manufacturers to begin shipping more formula into the U.S.

In a letter Wednesday to the Department of Health and Human Services and the Department of Agriculture, the president directed the agencies to work with the Pentagon to identify overseas supply of formula that meets U.S. standards over the next week, so that chartered Defense Department flights can swiftly fly it to the U.S.

“Imports of baby formula will serve as a bridge to this ramped-up production,” President Biden wrote.

Regulators said Monday that they’d reached a deal to allow Abbott Nutrition to restart its Sturgis, Michigan, plant, the nation's largest formula plant, which has been closed since February due to contamination issues. The company must overhaul its safety protocols and procedures before resuming production.

After getting the FDA’s OK, Abbott said it will take eight to 10 weeks before new products begin arriving in stores. The company didn’t set a timeline to restart manufacturing.

The White House actions come as the Democratic-led House approved two bills Wednesday addressing the baby formula shortage as lawmakers look to show progress on what has become a frightening development for many families.

One bill with wide bipartisan support passed by a vote of 414-9. It would give the secretary of the Agriculture Department the ability to issue a narrow set of waivers in the event of a supply disruption. The goal is to give participants in an assistance program commonly known as WIC the ability to use vouchers to purchase formula from any producer rather than be limited to one brand that may be unavailable. The WIC program accounts for about half of infant formula sales in the U.S.

The other measure, a $28 million emergency spending bill to boost resources at the Food and Drug Administration, passed by a mostly party-line vote of 231-192, and it’s unclear whether the Senate will go along.

“This bill just continues the Democrats' strategy of throwing money at the same bureaucrats who caused the crisis and who have not made its solution a priority," said Republican Rep. Andy Harris.

Rep. Rosa DeLauro, the Democratic chair of the House Appropriations Committee, said the money would increase FDA staffing to boost inspections of domestic and international suppliers, prevent fraudulent products from getting onto store shelves and acquire better data on the marketplace.