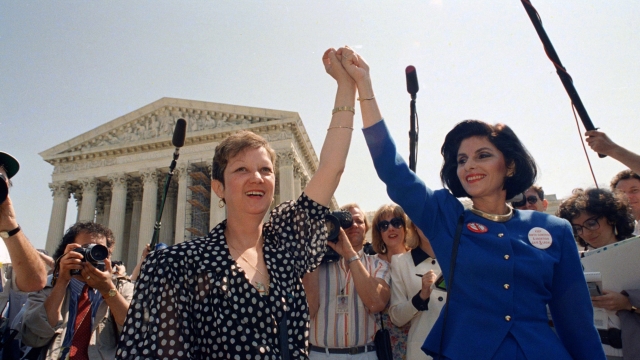 NEWSY'S MARITSA GEORGIOU: Gloria, you have called the leaked draft opinion "catastrophic." Do you believe the court will actually go through with this?

GLORIA ALLRED: Yes, I do. There may be some change in the language of this draft opinion that was leaked, but I do believe that there will be sufficient votes to support a majority opinion, which will most likely be released in the next six weeks, or perhaps, at least by the end of June. And that Roe v. Wade will be reversed. Not just modified, not just chipped away at, but completely struck down. And this is catastrophic to the lives and the health and the safety of women and girls.

GEORGIOU: You've told your own personal story of having an abortion after you were raped at gunpoint well before Roe. You say it almost killed you. If states with so called "trigger laws" begin to ban abortions, what kind of choices will women in those states be faced with?

ALLRED: They will be faced with choices similar to what I experienced when I was in my 20s, which was in the 1960s, when I was raped at gunpoint in Mexico when I was there on a vacation. I returned to California and it was not legal for a doctor or a nurse, a health care provider to provide a legal abortion in California. And so I had to find a back alley, a person to do it if I paid him. And I did pay him and he did it. And then I was left in a bathtub hemorrhaging, soaked in my own blood. Developed a 106-degree fever. At some point, an ambulance was called. I was taken to the hospital and packed in ice and a nurse said to me — and I relate this in my documentary, which is on Netflix called "Seeing All Red." But at some point, a nurse came over to me and said, "I hope you've learned a lesson"or "This will teach you a lesson." She was obviously anti-choice and she knew that I had the abortion because the only way you could get into the hospital — you couldn't get it in there to have an abortion. You could only get in there if you were hemorrhaging and almost dying from an illegal abortion. And so she said, "I hope this teaches you a lesson." It did teach me a lesson, but not the one she wanted me to learn. And the lesson is that abortion must be safe, legal affordable and available. And I have been fighting for pro-choice ever since then and even more so since I became a lawyer 47 years ago because I know what's at stake. I've suffered it. I almost died, millions of women either died or were maimed or suffered from illegal abortions before Roe v. Wade. Same thing is going to happen now. Half the states are going to criminalize it — some already have — others have trigger laws, which means that once Roe v. Wade is overturned, those laws will go into effect July 1 or August 1 in many states. So, half the states will make it illegal and the other half will be haven states, like California and New York. And there will be many women who will try to come to those states where abortion is still legal. But many poor women and young women and women of color and rural women will not have the money to come to another state where they can get a legal abortion. They might try a medication abortion, like take a pill. But many states, even that is going to be illegal to self-induce an abortion. So these women who don't even have bus fare in some cases, their lives are going to be at risk. They will try to get an abortion and many of them will be harmed as a result.

GEORGIOU: Gloria, your former client, Norma McCorvey, aka Jane Roe, changed her stance along the way, working with opponents of abortion. She later said before she died, she was still for abortion rights and that she was paid to switch sides. With all that's happening right now, what we're talking about, do you think she would still go through with that case again? Would it all be worth it just to see what we're seeing right now — this case potentially overturned decades later?

ALLRED: Yeah, Jane — meaning Norma McCorvey, her actual name — was a very complicated woman. I helped her to have a voice, to be pro-choice and speak out, which she wanted to do and she did it for a number of years. And then, she did receive a lot of economic support — to be kind, I don't know why I should be kind, but I'm being kind — from the anti-choice side. And she switched sides and became an anti-choice advocate. But she did make that deathbed confession, so to speak, on tape before she died to say that she had always been pro-choice. And that was Norma. And she even continued to be in contact with me when she was anti-choice. But, of course, I kept and still keep all of her communications with me confidential. And she knew that I support her right to choose or not to choose abortion because that's what pro-choice means. Whereas the anti-choice side doesn't believe that a woman should be trusted with her choice, that she should have a right to choose. And, so that's different. But the point is this: Ending legal abortion doesn't end abortion. It just ends safe and legal abortions. So now we're going to have, you know, unsafe abortions. And I believe it's not really just about abortion. There's a race to control women by states. They're competing to see who can endanger a woman's life more. Some states, "We'll endanger them at 15 weeks by making them have the choice to get illegal abortions then." Others, "No. We want to endanger them even more. We'll do it in six weeks." Come on, let's call it what it is. The very strong base of the Republican Party is men. And the main base of the Democratic Party is women. And the men want to control the women's lives. But you know, we have to get out and we have to — the majority of the American people in every poll have shown that they support legal abortion, at least in the first trimester of a woman's pregnancy. So we have to mobilize voters so that we can win a national law. As President Biden said today, we need to codify the law. To put this in plain English it means pass the law that's been passed by the House of Representatives, which is called the Women's Health Protection Act. But the United States Senate is not going to pass it. They're going to filibuster it so they don't have to vote. And we need to get rid of the anti-choice United States senators. We need to elect pro-choice United States senators and let's win the protection back that all women and girls in this nation deserve.

GEORGIOU: Gloria Allred, thank you so much for your time tonight.