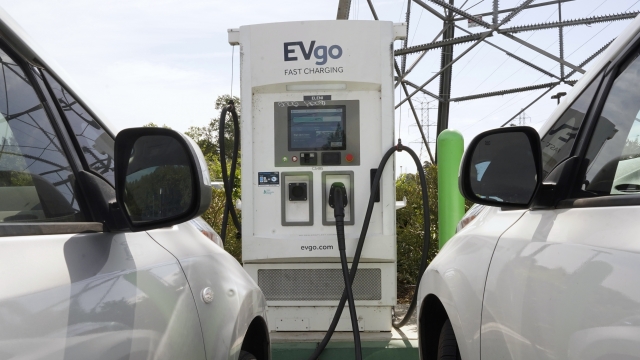 SMS
Are High Gas Prices Pushing People To Electric Vehicles?
By Newsy Staff
By Newsy Staff
May 9, 2022
Automakers are making more electric vehicles, and Americans are buying them. But they're not that accessible to everyone in the U.S.

Electric vehicles are more than just how Elon Musk made enough money to buy Twitter.

EVs are a fast-growing share of the U.S. car market, and federal policy — along with consumer demand — is pushing automakers to make more of their fleets electric.

President Joe Biden has pushed for electric vehicles to make up at least half of all new car sales by 2030, and the bipartisan infrastructure bill signed last year pledges more than $7 billion in funds for electric charging stations.

Data from the Department of Energy shows Americans bought more than 600,000 electric or plug-in hybrid vehicles in 2021, almost double the total from 2020 or 2019 and a huge leap from only a few hundred total in 2010.

So, why are more people going electric?

According to Jessica Caldwell, the executive director of insights at the car shopping and review site Edmunds, the answer isn't all too surprising.

"We recently did a survey asking people, 'If you would buy an electric vehicle, why would you buy one?'" Caldwell said. "And the answer is, I think, pretty typical of what you'd expect. Of course, environmental sustainability was on a lot of people's minds. Also, in light of high gas prices, of course, that really changed people's mind. I think to get people to truly change your behavior, you have to hit them in the wallet."

A Forbes-YouGov poll released last fall found that the two most popular reasons for buying an electric car were to help the environment and pay less in taxes or maintenance for their car.

At the same time, electric vehicles may still not be accessible to everyone for reasons that go beyond just cost.

Testimony last month from the U.S. Government Accountability Office said that while the U.S. government currently owns about 1,100 charging stations, it will need more than 100,000 to support widespread electric vehicle use. When broadened out to publicly available chargers not owned by the government, there are still less than a third as many electric charging stations as there are gas stations.

But at least one charging company doesn't necessarily see that as an issue. Jonathan Levy, the chief commercial officer at the charging network EVgo, says that the jump can be made progressively as electric vehicles spread.

All the while, the supply chain is also making it harder for companies to make enough electric vehicles to meet demand.

Electric vehicles rely on batteries that use minerals like lithium that can be difficult for companies to access. Without enough of a supply of minerals, there aren't enough batteries to make electric cars and trucks that people want.